THE UNDEAD (1957) is almost impossible to categorize. It's a wild mixture of reincarnation, time travel, medieval witchcraft, devil worship, and post-WWII science-fiction. The movie was produced and directed by the legendary Roger Corman, and released by American-International Pictures.

Nearly every film Roger Corman worked on automatically gets a cult status attached to it. THE UNDEAD isn't as renowned as Corman's other directorial efforts from this period, probably due to its rarity--I don't believe it has been officially released on home video. It's no classic, but it's definitely not boring--and that's why Corman's ultra-low budget films before his Poe period still hold up today.

A creepy scientist named Quintus (Val Dufour) picks out a streetwalker named Diana Love (Pamela Duncan) to take part in an experiment. Quintus wants to hypnotize the woman and find out if he can cause her to regress to a past life in another time period. The experiment is a success--Diana (along with the audience) is transported to the Middle Ages, supposedly in France, where she is now Helene, a maiden scheduled to be executed for being a witch. Helene tries to avoid her fate with the help of her lover Pendragon (Richard Garland). A real witch, Livia (Allison Hayes), tries to disrupt the couple's plans, since she desires Pendragon for herself. Back in the modern world, where Diana is still in a trance, Quintus comes to the conclusion that if Helene is saved from execution, all her future lives will be altered, and world history as well. Quintus somehow hooks himself up to Diana's brainwaves and enters her past Middle Age existence. Helene finds out she must make a hard choice on whether to live in the present or the future, while Quintus discovers his experiments have worked all too well.

The above plot summary doesn't begin to explain the bizarre elements one finds in THE UNDEAD. It doesn't mention that Satan himself, as played by Richard Devon, makes an appearance--he even addresses the viewer at the beginning of the film. Once the story shifts to the Middle Ages, all the characters speak in a pseudo-Shakespearean dialect, courtesy of the screenplay by Charles Griffith and Mark Hanna. Such dialogue doth fall heavy from thy performer's lips, and spending about an hour listening to it is about as much of a chore as it must have been to recite it. Charles Griffith (who wrote the original THE LITTLE SHOPPE OF HORRORS) was a master of dark humor, so I assume that the florid archaic verse might have been meant to be sarcastic.

Other goofy features in THE UNDEAD include a rhyming gravedigger (Mel Welles) and a "good" witch (Dorothy Neumann) who tries to help out Helene. Corman regular Bruno Ve Sota plays a tavern keeper, and the iconic Dick Miller, here billed as "Richard", plays a leper who is cured of his illness after signing his soul away to Satan.

Another cult icon, the sultry Allison Hayes, walks away with the film in the showy role of Livia. The future 50 foot woman gets a great camera pan from her feet all the way to her face, showing that she's much better built than all the sets in the movie combined. Hayes' Livia has the ability to turn into various animals, and she's accompanied by a midget familiar played by Billy Barty. Livia and her Imp are far more interesting than anyone else in the cast--one wonders why the slinky witch would have any desire for the underwhelming Pendragon as played by Richard Garland. Livia is a character that might have been played by Barbara Steele if Corman had made this film five years or so later.

Hayes stands out even more when compared to Pamela Duncan, who doesn't register strongly enough as either Diana or Helene. (Other veteran Corman actresses such as Susan Cabot and Beverly Garland would have been much more suitable.) 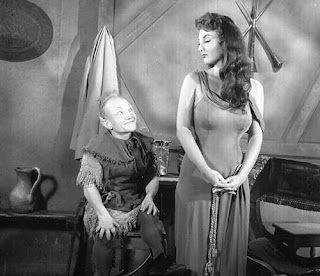 Billy Barty and Allison Hayes in THE UNDEAD


Five years or so later, Roger Corman was right in the thick of his period of making films based on the works of Edgar Allan Poe. One could say that THE UNDEAD marked Corman's first foray into Gothic territory. It must be said that the cut-rate THE UNDEAD makes the Corman Poe pictures look like multi-million dollar productions. Most of the atmosphere in THE UNDEAD is made up of lots of stage fog and fake shrubbery. (Corman has stated in interviews that most of the movie was filmed in a refurbished supermarket.) The black & white photography helps things a bit (I think the movie would have looked even cheaper if it had been made in color). There's no gore, but there's plenty of beheadings, and there's a sequence where Helene hides in a coffin underneath a corpse. Corman tries to spice up a somewhat desultory Black Mass by having Satan conjure up a trio of Vampira lookalikes, who proceed to perform a short bump and grind dance routine.

The most notable thing about THE UNDEAD (other than Allison Hayes), is the twist ending, which seems to me more fantasy than science fiction. The entire movie can be placed in all sorts of genres. All the disparate elements that make up THE UNDEAD may mix together uneasily at times, but the movie isn't boring. In the Roger Corman films before his Poe period, something was always happening in them, no matter how silly or outrageous that something might have been. What makes the work of Roger Corman stand out from other ultra-low budget drive-in films from this period is that his films move, and they are memorable.
Posted by Dan Day, Jr. at 12:51 PM