FEAR IN THE NIGHT On Blu-ray From Shout Factory 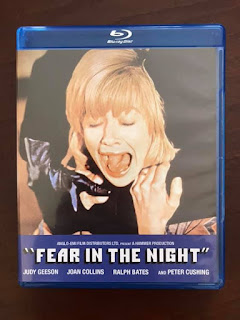 It's another Region A Hammer release from Shout Factory--this time it's the 1972 psychological thriller FEAR IN THE NIGHT.

In the early 1960s Jimmy Sangster wrote a number of twist-filled contemporary-set shockers that were made by Hammer and influenced by the French film LES DIABOLIQUES. Two of these films, TASTE OF FEAR and PARANOIAC, are quite good. In the early 1970s, after Sangster had directed HORROR OF FRANKENSTEIN and LUST FOR A VAMPIRE for Hammer, he went back to a story called THE CLAW that had been written a decade earlier. Sangster produced, directed, and co-wrote what became known as FEAR IN THE NIGHT, the last of Hammer's psychological thrillers.

In his audio commentary on this disc, Troy Howarth states that, as a writer, Jimmy Sangster was an "economizer". Essentially, that means that Sangster knew how to write scripts that made the most out of the modest budgets favored by Hammer. FEAR IN THE NIGHT is a perfect example of this. There's only four main characters in the film, and there's only one major location. There's no major special effects, or action sequences. The movie overall is quite simple.

Judy Geeson plays Peggy, a 22 year-old newlywed who is moving into a cottage located on the grounds of the private school her husband Robert (Ralph Bates) works at. Peggy is recovering from a nervous breakdown, and she's convinced that she's been attacked by a person with an artificial arm. Peggy is told by her husband that the school is empty due to a term break. While wandering the grounds Peggy comes across the mysterious headmaster (Peter Cushing), and later, his arrogant wife (Joan Collins). The headmaster has--you guessed it--an artificial arm, and Peggy winds up confronting the man with a shotgun...but the young woman has no idea what trouble lies in store for her.

I'm not going to give away the climatic twists in FEAR IN THE NIGHT, but they're very easy to figure out, especially if you've seen most of the other Hammer psychological thrillers. There really isn't much to the main plot--the script could have easily been made as an hour-long TV episode. Judy Geeson spends a lot of time wandering around empty corridors and exploring vacant rooms. Thankfully Geeson is appealing enough to where the viewer is interested in what happens to her. Peggy is a vulnerable and insecure character, but Geeson (an underrated actress) is able to gain sympathy without appearing weak. Ralph Bates seems more suited to play a contemporary person than one of his Gothic Hammer roles, and Joan Collins plays the type of role one expects Joan Collins to play.

Peter Cushing has what is really a guest part (one hears his voice more than actually sees him), but he's still able to make a very great impression out of having very little to do. (When I met Judy Geeson a couple years ago at a convention, she went out of her way to tell me how much she adored Peter Cushing.)

FEAR IN THE NIGHT is a particularly tame film when one compares it to other low-budget British horror movies made during the same period. It's not a great movie, and it's very predictable, but I think its old-fashioned attitude allows it to hold up well when looked at today. Jimmy Sangster was a much better writer than a director, but as a filmmaker he seems a lot more comfortable here than he did with HORROR OF FRANKENSTEIN and LUST FOR A VAMPIRE. It's an okay little movie, and it certainly doesn't look low-budget, due to Arthur Grant's efficient cinematography.

Shout Factory presents FEAR IN THE NIGHT in two different aspect ratios--1.66:1 and 1.85:1. The print used on this disc is a fine-looking one, with vibrant color.

The extras feature an interview with Jimmy Sangster from the 1990s (it's the same one that is also presented on Shout Factory's HORROR OF FRANKENSTEIN Blu-ray). There's also a short program in which Hammer experts such as Jonathan Rigby discuss the movie.

There's a brand new commentary with Troy Howarth, and it is an outstanding one. Howarth analyses, among other things, Jimmy Sangster's career, the entire series of the Hammer psychological thrillers, and Peter Cushing's film output after the death of the actor's wife. An older commentary with Sangster and Marcus Hearn is also included.

One more thing I have to mention, and this is for those folks who have never seen the movie and might be interested in purchasing this disc...the inside of the disc cover gives away the main plot twist!!