BLOOD FROM THE MUMMY'S TOMB On Blu-ray From Shout Factory 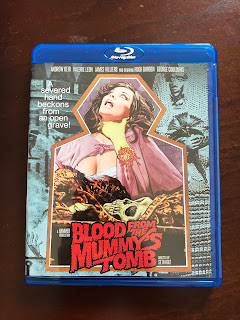 Yet another Hammer Region A Blu-ray release from Shout Factory--this time it's BLOOD FROM THE MUMMY'S TOMB. This 1971 film is best known for what happened during the making of it.

Peter Cushing was cast in the role of Professor Fuchs in the movie, but he had barely started working on it when his wife became gravely ill and passed away. Cushing was replaced by Andrew Keir, but a few weeks later director Seth Holt died, and Hammer executive Michael Carreras replaced him. The result is a understandably disjointed affair, but it comes off better than one would think.

Christopher Wicking wrote the script for BLOOD FROM THE MUMMY'S TOMB, and the movie has his usual complicated story structure. The film is an adaptation of Bram Stoker's 1903 novel THE JEWEL OF SEVEN STARS, but it is surprisingly set in contemporary times. The story details how the members of an Egyptian expedition, lead by Professor Fuchs (Andrew Keir), discover the tomb of Queen Tera, an infamous sorceress. The moment Tera is discovered, the wife of the professor dies in childbirth. The professor's daughter, Margaret (Valerie Leon), is approaching her 21st birthday, and one of the members of the expedition, Corbeck (James Villiers), wants to use the beautiful woman in an attempt to resurrect Tera. Will Margaret be able to avoid the overriding influence of Tera upon her--or she is nothing more than a reincarnation of the Egyptian witch?

I first saw BLOOD FROM THE MUMMY'S TOMB way back in the 1980s on the "Son of Svengoolie" program. I'm sure it was heavily edited, and I found it too confusing. I haven't viewed it as many times as most of the other Hammer thrillers--this Blu-ray is actually the first time I've owned it on home video. Even in its uncut state BLOOD FROM THE MUMMY'S TOMB is confusing, but like other movies scripted by Christopher Wicking, one appreciates it more on multiple viewings. Valerie Leon looks stupendous in the lead role (especially in HD), and she brings a striking presence. Leon was dubbed, but I think this effect actually adds to her otherworldly quality. Why Hammer never used her again is beyond me. Andrew Keir does very well considering he took the role with almost no preparation, and the movie is enlivened by three very eccentric English character actors: James Villiers, George Coulouris, and Aubrey Morris (I'm surprised they didn't put Freddie Jones in this as well).

BLOOD FROM THE MUMMY'S TOMB does not have a mummy in it--but I think that's one of the reasons the movie winds up working. It defies the expectations one has from the title. There's plenty of ambiguity in the story, particularly the climax. One never knows exactly what the characters are going to do, or which of them can be trusted. It's also quite bloody, with numerous ripped-out throats--one has to wonder how it got a PG rating in the U.S. If Peter Cushing had been able to star in the film, and Seth Holt had been able to complete it as director, it might now be remembered as one of the better Hammer productions from the early 1970s.

Shout Factory once again provides a fine-looking print, presented uncut in 1.66:1 & 1.85:1 aspect ratios. There's two new (and very short) interviews with a couple of men who worked on the film: Tony Dawe and Neil Binney. There's older interviews with Christopher Wicking and Valerie Leon, and a recent look at the production of the film. A new audio commentary is included by Steve Haberman, and he efficiently discusses the various trials and travails that affected the making of the film. There's also a trailer, and TV and radio spots which advertised the movie being on a double-bill with Jess Franco's NIGHT OF THE BLOOD MONSTER (this double feature was rated PG!). Valerie Leon fans will be happy to know that there's a still gallery which features several glamour shots of her.
Posted by Dan Day, Jr. at 11:01 AM