HERCULES IN THE HAUNTED WORLD On Blu-ray From Kino 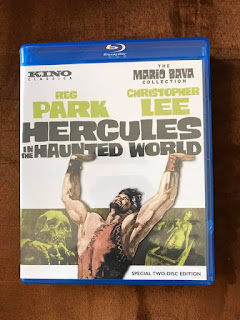 HERCULES IN THE HAUNTED WORLD (1961) isn't just another cheesy sword & sandal movie. It is a phantasmagorical wonder, allowing Mario Bava's creativity and ingenuity to run riot (even if the film's budget didn't).

Kino has given the title a magnificent Region A Blu-ray release, which contains two discs and three different versions of the film:

The U.S. release, HERCULES IN THE HAUNTED WORLD

The European release, with the German title VAMPIRE GEGEN HERAKLES, with an Italian dialogue track and English subtitles

The U.K. release, HERCULES IN THE CENTER OF THE WORLD

There are minor differences between the three versions, but all of them look spectacular, highlighting  Mario Bava's eye for color and composition.

Bava had worked on the two films that had started the sword & sandal craze, HERCULES and HERCULES UNCHAINED, as cinematographer, effects artist, and at times director. In HERCULES IN THE HAUNTED WORLD Bava got his second official credit as overall director, along with camera and effects work. The result makes other mythological strongman movies look positively tepid.

The mighty Hercules (Reg Park) literally goes to Hades in an attempt to break the spell that has taken hold over his lady love (Leonora Ruffo). The evil power behind this situation is the young woman's uncle, Lico (Christopher Lee), who is using dark forces to gain control over the land. Hercules goes through a number of trials and tribulations before he confronts Lico and his undead minions.

HERCULES IN THE HAUNTED WORLD (or whatever title you choose to pick for it) is a fun action adventure that is immeasurably helped by Mario Bava's artistry. Reg Park's Hercules is a bit more pleasant and less forceful in this outing, making him an appealing hero. Christopher Lee is more than a match for him as the villain. Unfortunately Lee is dubbed in all versions of the film, but his iconic presence still makes an impact. Interestingly Lico has a tendency to take the blood of others, but whether he is an "official" vampire depends upon your interpretation of the character.

Kino has been releasing a magnificent series of Mario Bava titles over the last few years, and this one is no exception. HERCULES IN THE HAUNTED WORLD was put out on DVD by a company called Fantoma in the early 2000s (I have this copy, of course). The DVD version was a decent transfer but this Blu-ray blows it away. The sound quality is also an improvement.

Bava expert Tim Lucas provides yet another of his outstanding commentaries that focus on the director and his work. Lucas does spend a bit of time pointing out the inconsistencies in the story (which honestly I never really thought about), but he doesn't do it in a derogatory fashion. The other main extra is a short program that features an interview with actor George Ardisson (who played Theseus in the movie) and a discussion on the film by Fabio Melelli.

I cannot emphasize enough how fantastic this movie looks on this Blu-ray, and how fantastic it is to have access to three different versions of it. I know a lot of folks look down on the sword & sandal genre, but due to the genius of Mario Bava HERCULES IN THE HAUNTED WORLD winds up being a fantastic, entertaining adventure that has classic horror overtones. It needs to be seen and appreciated, especially by those willing to use their imaginations. This Kino Blu-ray will more than likely appear on my list for best home video releases of the year.