THE BRIDE OF FRANKENSTEIN Original Soundtrack Recording On CD 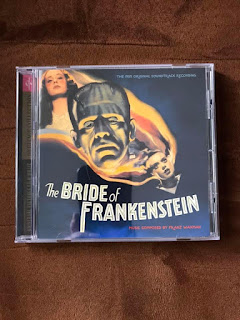 La-La Land Records has released a CD of original soundtrack music from THE BRIDE OF FRANKENSTEIN as part of the Universal Pictures Film Music Heritage Collection. It is not the complete original soundtrack--according to the liner notes only about 35 minutes of the score exist--but it is more than enough to showcase the brilliance of composer Franz Waxman.

The CD includes those 35 minutes, along with about 9 minutes of alternate cues. On some of the alternate tracks voices can be heard (I'm sure there's some film music expert out there who can identify those voices). There's 13 total tracks in all, including the entire musical sequence for the "birth" of the Bride. The release is limited to 3000 units.

Franz Waxman's score for THE BRIDE OF FRANKENSTEIN isn't just great classic horror film music, it's one of the best movie scores for any classic Hollywood film period. The score is as eclectic and unique as THE BRIDE OF FRANKENSTEIN is as a film. Waxman did use what might be considered now "scare" cues, but the score also has a playful, darkly sardonic tone to it. There's also a fairy tale aspect to the music as well. Waxman's score was so expressive, Universal reused it in dozens of other features and serials--if you've watched any horror or science-fiction film from the studio that was made in the mid-1930s to the 1940s, chances are you've heard this music frequently.

The sound of the music on this CD is quite good. One has to remember that this music was recorded over eighty years ago, and a lot of technical work went into getting the tracks presentable enough to be used on a CD.

The CD comes with a 20 page booklet that contains an excellent and informative essay by Frank K. DeWald. The author examines how Waxman got the chance to do the score for THE BRIDE OF FRANKENSTEIN--he even details the first meeting between the composer and director James Whale. DeWald also fully analyses each track and how it was used in the film. The booklet is illustrated with several stills from the production.

THE BRIDE OF FRANKENSTEIN is one of my top ten favorite movies of all time, so of course I can't help but call this a magnificent release. Parts of Waxman's score have been rerecorded several times, but there's nothing better than having the original soundtrack music available. La-La Land Records is to be commended for putting this CD together, and hopefully they will be releasing other original music from the classic Universal horror films in the future.
Posted by Dan Day, Jr. at 12:45 PM