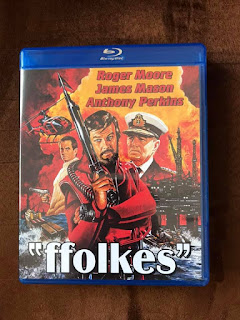 Roger Moore was born on this day in 1927, so there's no better time to write a blog post on Kino's new Region A Blu-ray of the 1980 action-suspense film FFOLKES.

Moore plays Rufus Excalibur ffolkes (the first letter in his last name is supposed to be smaller-case), a rather eccentric underwater expert and leader of his own personal group of commando-like frogmen. A group of men (led by Anthony Perkins) has hijacked a North Sea oil rig, and they are demanding a huge ransom from the British Government. The authorities decide to call in ffolkes to deal with the matter, despite his acerbic and irregular attitude. The prickly ffolkes has less than 24 hours before the oil rig is set to explode.

As mentioned in the audio commentary on this disc, FFOLKES is something of a throwback to the many English action thriller movies made in the 60s and 70s. Producer Elliot Kastner (WHERE EAGLES DARE) and director Andrew V. McLaglen (THE DEVIL'S BRIGADE, THE WILD GEESE) were veterans of this sub-genre. Despite the presence of the then-current 007 and the movie's advertising artwork (see above), FFOLKES is not a slam-bang stunt filled production. It has a lower-key, realistic tone to it, with more tension and suspense than bullets or fistfights.

FFOLKES is also rated PG, which means no overt gore, or suggestive situations. Believe it or not, Moore's ffolkes doesn't flirt, or even get to kiss a woman--because the character is annoyed by them! The man is much more at home with cats, and he takes to needlepoint when he's trying to think. He's also bearded, brusque, opinionated, arrogant, and he's fond of drinking hard liquor straight from the bottle. When watching this film it's obvious that Moore had a grand time playing this role, since it enabled him to go totally against the grain. The character of ffolkes might have come off as a jerk if played by most other actors, but Moore has such charisma and screen presence he makes the fellow entertaining. Much of the enjoyment of the film is due to watching ffolkes exasperate everyone around him.

The supporting cast helps the movie immensely. James Mason, as a Royal Navy Admiral, is something of an "M" to ffolkes, and a foil to him as well. Anthony Perkins is a very, very tense main bad guy, with the always effective Michael Parks backing him up. (Parks gets a lot of creepy attitude out of the Coke bottle glasses he wears throughout the movie.) Film buffs will appreciate seeing supporting actors such as Jack Watson (THE GORGON) and David Hedison (a personal friend of Roger Moore). Faith Brook plays the female British Prime Minister, and while there's no doubt the role was influenced by Margaret Thatcher, the character is not portrayed in an insulting or humorous manner.

FFOLKES does not have a lot of showy FX, but it does have very impressive model and miniature work. The head of special effects for this film was John Richardson, a longtime veteran of the James Bond films. The music was composed by Michael J. Lewis, but the score sounds very much like the work of Ron Goodwin, who did a number of soundtracks for action movies like this.

Kino's Blu-ray of FFOLKES uses a superb transfer, in 1.85:1 widescreen. The main extra is a commentary by film experts Howard S. Berger, Steve Mitchell, and Nathaniel Thompson. It is more analytic than fact-filled, which I appreciate. The men enjoy the movie, and they enjoy talking about it. The talk is wide-ranging, and the trio spend a lot of time discussing the career, and style, of Andrew McLaglen. McLaglen is not considered a "top-tier" director, but he made several entertaining films that are shown on cable TV constantly, and he knew how to tell a story. A number of trailers for similar action features released by Kino are also included.

FFOLKES is the type of picture that is now called a "Dad's movie". I first saw it on TV when I was a kid (I think it might have been its American network broadcast premiere). It's not a big-budget spectacular--it's more of a comfortable type of film to watch, and it owes a lot to the star power of Roger Moore. It also doesn't wear out its welcome at 95 minutes.