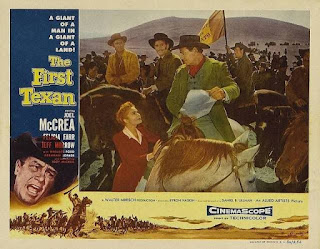 Last week a wrote a post about the 2004 THE ALAMO. This week I viewed another film dealing with subject of Texas independence: THE FIRST TEXAN, a 1956 production that is a mini-biography of Sam Houston.

Joel McCrea portrays Sam Houston, and here the statesman comes off like just about every other McCrea movie character--as a quiet, steadfast man of integrity. The story opens in 1832, with Houston crossing the Red River into Texas. It is mentioned that Houston was the governor of Tennessee, but he has resigned that position due to personal issues and traveled to Texas to start a new life. Texas at this time is still part of Mexico, and within the first few minutes of Houston's arrival he's already brawling with Mexican soldiers. One shouldn't judge the movie from this sequence, though....the rest of the tale is rather sedate.

The first part of the film deals with Houston's attempts to stay out of the tension between the American settlers of Texas and the Mexican government. This is reminiscent of the many Westerns where the famous lawman/gunslinger tries to settle down in a new town and live a peaceful life. Of course Houston gets caught up in the Texas independence movement, and he interacts with such luminaries as Jim Bowie (Jeff Morrow), William Travis (William Hopper), Stephen Austin, James Fanning, Davy Crockett, and even Andrew Jackson. After the fall of the Alamo (which is not shown onscreen), Houston becomes head of a ragtag army, and he tries to avoid the larger forces of Mexican leader Santa Anna until the Texas forces are in an advantageous position. The second part of the film is taken up with Houston's leadership of the Texas army, and the theme here is how many see the man as afraid to face Santa Anna due to his strategy of avoiding battle till the time is right. The movie ends with Houston's stunning victory against the Mexican army at San Jacinto.

I'm no expert on the life of Sam Houston, but the man lived a boisterous and colorful life. THE FIRST TEXAN may be in color and Cinemascope, but it is not a boisterous film. The movie has a very formal air to it, and it is very dialogue driven. Even the climatic battle of San Jacinto is not all that spectacular. The movie doesn't seem to have a large budget, since various soldiers and settlers ride over what looks like the same plot of land. McCrea's Houston is a virtuous, straight-arrow fellow, and the real Houston was far more complicated and far more opportunistic.

One would expect that all the various historical legends that pop up in the film would enliven the tale, but they are barely fleshed out, and appear as virtual cameos. The only supporting actor that grabs your attention is Jeff Morrow as Jim Bowie. He doesn't get a lot of screen time, but he shows some hot-headed charisma (Morrow himself would have made a good Sam Houston). Felicia Farr plays Houston's love interest, but this part of the story isn't all that interesting.

THE FIRST TEXAN was produced by Walter Mirisch, and directed by Byron Haskin, who is best known for the science fiction films he made with George Pal. It's a competently made picture, but it lacks a certain spark. A film that deals with the life of Sam Houston and the battle for Texas independence should be a lot more adventurous and noteworthy.