Looking over my blog posts for 2019, I noticed that I wrote nine different reviews for Hammer movies on Blu-ray released by Shout Factory. That still doesn't even cover all of the Hammer Shout Factory releases I bought this year.

I didn't buy every Hammer movie released by Shout Factory. I didn't get THE VENGEANCE OF SHE, or LUST FOR A VAMPIRE, or SCARS OF DRACULA. Ironically all three of those titles wound up on a post I wrote in 2018 listing my least favorite Hammer films. I also have not purchased TO THE DEVIL A DAUGHTER.

Among the Hammer Shout Factory Blu-rays I did not get around to writing reviews on are QUATERMASS AND THE PIT and THE DEVIL RIDES OUT. The latter is one of the best Hammer films ever made, while the former is one of the best ever science-fiction films, period. These two movies are held in such high esteem that I seriously wondered what more I could say about them.

The Shout Factory Blu-rays for each look fantastic, and they are filled with extras, especially QUATERMASS AND THE PIT. THE DEVIL RIDES OUT has a bonus version of the film with "updated" special effects that were added a few years ago. I had never seen this version, and I have to admit that the new FX (which were quite minor) were not as annoying as I thought they would be. (I still prefer the original version, hands down.) 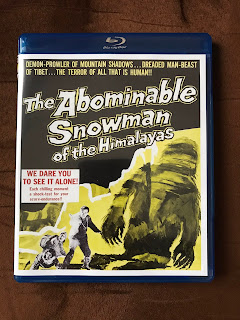 THE ABOMINABLE SNOWMAN OF THE HIMALAYAS is an atmospheric black & white effort directed by Val Guest and written by Nigel Kneale. (I wrote a post on the film in September of 2016.) The HD transfer used by Shout Factory has some scenes missing, so parts of a non-HD print are used to fill in the gaps (the difference in quality is quite noticeable when watching this Blu-ray). 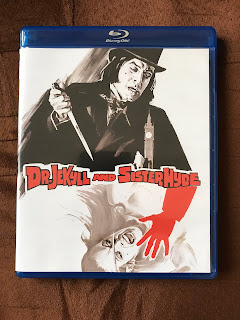 DR. JEKYLL AND SISTER HYDE is one of the best Hammer films from the early 1970s, due to Brian Clemens' witty & stylish script, and what I consider to be Martine Bestwicke's best screen performance. The movie looks great on this Blu-ray, and among the extras is a new interview with Martine. (I wrote a full post on this movie in September of 2017.)

All the movies I have mentioned here have reverse cover sleeve artwork, and brand new commentaries. Most of the new talks on the Shout Factory Hammer Blu-rays feature some sort of combination of Ted Newsom, Constantine Nasr, and Steve Haberman, or one of them individually. (Bruce Hallenbeck does the commentary for DR. JEKYLL AND SISTER HYDE.) It would be nice if Shout Factory got some other genre experts involved in these talks (there's plenty of Hammer fanatics out there). This series of Hammer releases also contain vintage commentaries, and these are very important, since they usually feature artists who actually worked on these productions. (Sadly, many of these artists have passed away since their commentaries were recorded.)

Shout Factory has more Hammer releases in store for the future, and that's great news for those who own Region A Blu-ray players. When one also takes into account the company's Universal and Val Lewton releases, it must be said that they have cornered the market when it comes to classic horror on home video in 2019.