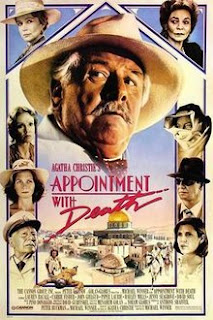 During my teenage years I went through an Agatha Christie phase, where I started reading most of her novels. I also started watching the various movie and TV adaptations of her work. I haven't watched all the adaptations--especially the television ones, because there's been so many of them.

The all-time best movie based on the work of Agatha Christie, in my opinion, is still the 1974 MURDER ON THE ORIENT EXPRESS. Albert Finney played Belgian sleuth Hercule Poirot in that story. DEATH ON THE NILE (1978) and EVIL UNDER THE SUN (1982) followed, with Peter Ustinov playing Poirot in both features.

Ustinov also played Poirot in three American TV movies made in the 1980s (unfortunately these stories were also set in the 1980s, and have very little of the Christie touch to them). The actor appeared as the character for the last time in the 1988 theatrical film APPOINTMENT WITH DEATH.

I had never seen APPOINTMENT WITH DEATH. For some reason (I assume rights issues) the movie is not available on American home video. I recently discovered that I had access to it through Xfinity OnDemand. It was a dud at the box office, and it has been stated on a few sources that the production was a total bomb.

The movie is based on the 1938 Christie novel of the same name. I'm sure I read that novel long ago, but I certainly don't remember the exact details of it. A quick check on Wikipedia revealed that the movie's script and the book are almost exactly the same (which is quite rare when it comes to Christie adaptations).

The story revolves around the Boynton family, which is under the thumb of their stepmother, the overbearing Mrs. Boynton (Piper Laurie). After inheriting her late husband's fortune (due to blackmailing the family lawyer into burning a second will), the woman demands that the entire family take a trip to Europe and the Middle East. While in British-held Palestine, the family encounters the famous Belgian detective Hercule Poirot (this should immediately tip anyone off to the fact that someone's going to wind up dead). Mrs. Boynton winds up offending nearly everybody, which leaves plenty of suspects when she is found dead. As expected, Poirot manages to figure it all out.

APPOINTMENT WITH DEATH with made by the Cannon company, who were best known for their 1980s cheesy action flicks. The movie was co-written, produced, and directed by Michael Winner, who had made plenty of violent thrillers of his own, including the original DEATH WISH. The idea of Cannon and Michael Winner making an Agatha Christie movie seems a bit strange, but the mystery author's name has always gotten attention from audiences.

The final result isn't the bomb that some have said it was. It's not an ineptly made film--it uses many picturesque Israeli locations, the costume design is well done, and Winner does try to inject some mild visual flair. The story, however, is a bit too easygoing and basic. There's no sense of dread or menace. There's only two murders in the entire film, and Mrs. Boynton gets offed not until 45 minutes in. The characters are the predictable types one finds in nearly every classic murder mystery--greedy stepmother, arrogant aristocrat, duplicitous lawyer, etc. There's plenty of fine actors here, but the roles are so simple that none of the performers really get a chance to shine. The only edge in the story is provided by Piper Laurie as Mrs. Boynton.

The other major members of the cast are Lauren Bacall, John Gielgud, Carrie Fisher, Hayley Mills, Jenny Seagrove, and David Soul. An interesting group, but not as star-studded as most big-screen Christie adaptations. (Bacall and Gielgud were both in the '74 MURDER ON THE ORIENT EXPRESS.) Peter Ustinov appears somewhat tired in his last go-round as Poirot, but he does get to make a few humorous observations. He also has an unerring ability to be in the right place and in the right time to overhear vital conversations (one of the characters in the story even tells him this).

APPOINTMENT WITH DEATH is an okay film, but there's nothing really about it that makes it stand out from all the many other Agatha Christie adaptations. It's a very standard murder mystery, and it's perfect for those who want to relax and wind down for 100 minutes.