DEMONS OF THE MIND 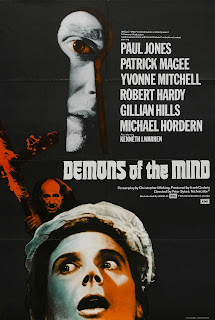 One of the latest Shout Factory Hammer Blu-ray releases is DEMONS OF THE MIND, a film produced in 1971. This was one of the few Hammer movies I had not yet seen, until I purchased the Blu-ray. It doesn't have the most sterling reputation, and it is a downbeat, puzzling, and at times disturbing affair. But it also looks much more stylish and expansive compared to most Hammer titles made during the same period.

Those wanting a comprehensive history of the film are encouraged to read issue #31 of Richard Klememsen's magazine LITTLE SHOPPE OF HORRORS, which gives all the information one would want to know about it. The original story came from the film's producer Frank Godwin and screenwriter Christopher Wicking, and it was called BLOOD WILL HAVE BLOOD. Godwin convinced Hammer it was based on an old Bavarian legend (it wasn't). The original story contained a werewolf subplot, which Hammer asked to be removed.

As usual with any script written by Christopher Wicking, the story is at times hard to follow, with various characters and incidents popping in and out which seemingly have little to do with the main plot. In 1830s Bavaria, a Baron Zorn (Robert Hardy) keeps his young son and daughter (Shane Briant and Gillian Hills) under lock & key at his vast remote estate. The Baron is being treated and advised by a strange doctor named Falkenberg (Patrick Magee). The Baron is convinced that he and his children are cursed by their hereditary bloodline. Meanwhile, a number of young girls from the nearby village have been murdered. Dr. Falkenberg believes that Zorn's condition results from "demons of the mind"--mental illness. The Doctor is right, but not in the way that he thinks.

It's hard to give an accurate synopsis for DEMONS OF THE MIND, simply because there are so many confusing elements in the picture. The script touches upon sexual aberration, incest, child abuse, mental instability, and the conflict between science and superstition. Needless to say, this is not a fun Saturday afternoon monster flick. Despite the Gothic trappings, it is very adult, with much blood and nudity. I haven't even touched upon Paul Jones (the former lead singer of Manfred Mann), who plays the movie's apparent male hero. (In the best Hammer tradition, the young male romantic lead doesn't accomplish very much.) And I haven't yet mentioned distinguished British actor Michael Hordern, who plays a mad, mumbling assumed priest who wanders in and out of the tale. The movie has a number of byways that might have been interesting on their own, but they never really coalesce into a satisfying whole.

Nevertheless, DEMONS OF THE MIND does have an impressive visual style to it, due to the direction of Peter Sykes and the cinematography of Arthur Grant. Sykes makes great use of actual locations, such as Wykehurst Place, which stood in for the Baron's manor. The forest in good old Black Park near Pinewood was used once again in a Hammer film, but somehow in DEMONS OF THE MIND it seems fresh and subtly different. This film doesn't have the cramped and cut-rate look of SCARS OF DRACULA or HORROR OF FRANKENSTEIN.

DEMONS OF THE MIND also does not have the typical Hammer cast. Producer Frank Godwin didn't want to use the usual Hammer actors. He was even thinking of a big mainstream name to play the Baron, such as James Mason or Paul Scofield. Robert Hardy wasn't on their level, and his portrayal of the Baron has come under criticism. Hardy does seem at times to be a bit hammy, and the Baron's actions do seem rather inconsistent, but it has to be said that the character is mentally unstable. (Personally, I think John Carson would have made a great Baron Zorn.) The idiosyncratic Patrick Magee, as expected, steals every scene as Dr. Falkenberg (Magee would have made a great Baron too). The film's best performance is given by Shane Briant in his Hammer debut as the Baron's son, a confused man-child. English Gothic veterans Kenneth J. Warren and Virginia Wetherell have small but important roles, and the aforementioned Michael Hordern gets attention with his showy part, even though it seems his character wandered into the story from another movie.

DEMONS OF THE MIND didn't make much money or get much attention during its original theatrical release. For years it was one of the most obscure Hammer horrors--I never remember it being shown on commercial or even cable TV in my area. The movie's reputation seems to have grown a bit over the years. I wouldn't say I loved the movie after seeing it for the first time....but I was more impressed with it than I thought it would be. It's not a cheesy horror flick, it is a serious, adult Gothic drama that is sometimes hard to follow. A better structured script, and perhaps a more assured lead performance might have made the film one of the better Hammer productions of the early 1970s.
Posted by Dan Day, Jr. at 2:38 PM