Last week a Facebook friend of mine posted photos of her wearing an outfit inspired by a 1935 film called FALSE PRETENSES. During the movie a similar outfit was worn by the leading actress, Irene Ware. Ware is best known for co-starring in two films with Bela Lugosi: CHANDU THE MAGICIAN (1932) and the 1935 THE RAVEN.

Anyone who chooses to dress like Irene Ware in this day and age deserves some type of appreciation, so I figured the least I could do would be to watch, and write a blog post about, FALSE PRETENSES. There is a decent print of the film on YouTube.

Irene Ware plays a young woman by the name of Mary, who works as a waitress. Mary wants to make something of herself, and get more out of life. Unfortunately she loses her job due to an annoying would-be suitor. One night on a bridge Mary encounters Kenneth Alden (Sidney Blackmer), an upper-class fellow who has lost most of his fortune. Mary stops Alden from thinking about jumping off the bridge, and she convinces him to take part in a plan that might help them both. The plan is for Alden to introduce Mary to his high-society friends, where she is sure she can snatch a rich husband. In return, Mary will pay Alden a large fee from her newfound wealth for his services as her "agent". As expected, complications ensue. Alden starts to fall for Mary, while she falls for a "businessman" (Russell Hopton) who has secrets of his own.

FALSE PRETENSES is an okay little movie, nothing spectacular. The best thing about it is the main idea of a woman using a "business arrangement" to nab a rich husband. (I'd love to see what directors like Capra, Lubitsch, and Sturges might have done with that plot.) At one point Alden sends Mary to a refinement tutor, but Irene Ware seems to already have more than a sufficient amount of refinement and poise. She also doesn't seem to act like all that much of a golddigger (an actress like Joan Blondell might have portrayed Mary as being somewhat more brazen about the whole scheme).

Irene Ware does come off as appealing, attractive, and very natural. She's more than able to carry this movie, and I think if she had been given the chance to play the lead in a major studio mainstream production made during this time, she would have done very well. 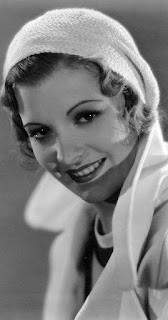 FALSE PRETENSES was directed by Charles Lamont, who in later years would make several Abbott & Costello and Ma and Pa Kettle films. There's nothing special about his style here. The supporting cast lacks the type of players that enliven the best romantic comedies, but there is silent screen star Betty Compson as Alden's former flame. Both Sidney Blackmer and Russell Hopton seem too old for Irene Ware (actors such as Robert Montgomery and Robert Young would have been perfect for this type of story).

Irene Ware has a bit of cult status due to her two-film association with Bela Lugosi, and FALSE PRETENSES shows that she could easily handle a leading romantic role. But I can't help but wonder what the story would have been like if made by a major studio, with a bigger budget and bigger stars. (For all I know, the story probably was remade or reworked at some point.)
Posted by Dan Day, Jr. at 2:39 PM