REQUIEM FOR A SECRET AGENT 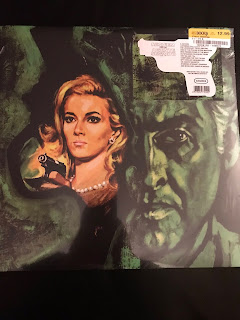 A few weeks ago I was with my brother at a Half Price Books in Illinois. While going through the soundtracks section I came across the original score, on vinyl, for a 1966 Eurospy film called REQUIEM FOR A SECRET AGENT (original Italian title REQUIEM PER UN AGENTE SEGRETO). It was brand new and only $13, so I picked it up.

The score was by Piero Umiliani, and it's a poppy combo of jazz and lounge, with a hint of John Barry. Most of the music is based around the movie's main theme, a Bond title song wannabe called "Don't Ever Let Me Go", sung by Lydia MacDonald.

I figured that since I had the soundtrack, I might as well watch the film, which I found available on YouTube. Unfortunately the music is much livelier than the movie.

REQUIEM FOR A SECRET AGENT was directed by Sergio Sollima, who was also one of the film's writers, along with Sergio Donati. The two Sergios are best known for their work on Euro Westerns. Most of the production was filmed in Morocco.

The story is set in Tangiers, where a number of American agents are being killed by a criminal society known as...."The Society". A freelance operative named Merrill (Stewart Granger) is sent in to get to the bottom of things. Merrill's investigations lead him to one of the Society's top men (Peter van Eyck), and a few European beauties.

The Eurospy and Euro Western genres have many things in common, including the tendency for individual titles to go beyond their original influences in all sorts of outlandish ways. REQUIEM FOR A SECRET AGENT is very low-key, with no mad schemes to take over the world, or stolen nuclear missiles. There's no over-the-top action sequences--at one point a boat filled with bad guys is blown up, but the viewer only hears the explosion instead of seeing it. In this movie espionage isn't glamorous or exciting, it's a deceitful and grubby affair, almost like a John Le Carre novel. It's a very unusual attitude for a Eurospy film to take.

Stewart Granger's Merrill is no dashing playboy--he's a smug, cynical fellow who's a bit of a jerk. He's not the most captivating person to watch over a 100 minutes. Granger seems a bit over the hill for this type of movie, but he does handle himself quite well in the fight scenes. German actor Peter van Eyck makes a fine villain (he actually would have done better in Granger's role).

The gorgeous Daniela Bianchi, best known as the female lead in FROM RUSSIA WITH LOVE, gets second billing in the main titles...but she's accidentally killed off at about the halfway point in the movie--by Granger, no less! Even before her character's untimely demise Bianchi doesn't get much screen time as the estranged wife of one of the agents killed in Tangiers. She basically has nothing more than an extended cameo. I'm sure she was given prominent billing to suggest that this film had a Bondian aspect to it. I must admit that my interest in the picture waned considerably when I realized Bianchi would no longer be in it.

Sergio Sollima directed a number of unique and interesting spaghetti westerns, but the Eurospy genre (at least with this title) apparently didn't seem to suit him. REQUIEM FOR A SECRET AGENT has a slack pace, and the Moroccan locations are not used to their best advantage (this may have been due to the budget). The best sequence in the story happens when Granger threatens to force a tied-up van Eyck into an incinerator--usually the villain does that to the hero. I've seen a few Eurospy entries that were wilder and more fun than some of the lesser Bond outings. REQUIEM FOR A SECRET AGENT isn't one of those--it plays out like a mediocre elongated episode of THE MAN FROM UNCLE.
Posted by Dan Day, Jr. at 12:47 PM