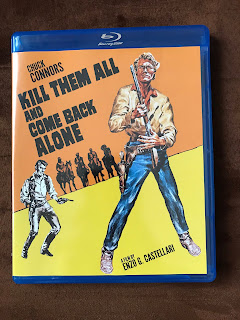 KILL THEM ALL AND COME BACK ALONE (1968) is made for all those who don't like the "boring parts" of a movie. It's almost wall-to-wall action, and the Euro Western has been released on Region A Blu-ray by Kino.

During the American Civil War, a hardened mercenary named McKay (Chuck Connors) assembles a team of tough renegades to steal a million dollars worth of Union gold for the Confederate government. McKay and his motley crew couldn't care less about one side or the other in the conflict--all they're interested in is the treasure. The group infiltrates a Union stronghold and McKay makes off with the gold, but there's plenty of double-dealing, backstabbing, and deceit before the money can be claimed by anyone.

KILL THEM ALL AND COME BACK ALONE (which is one of the great spaghetti western titles) was directed by Tarantino favorite Enzo G. Castellari. He's no Leone, or Corbucci, but he knows how to put together several tightly edited, rough-and-tumble action sequences. The script (which was co-written by Castellari) dispenses with any type of backstory for the characters--the only personal information we have on them is their names. Usually with a "band of dangerous characters assembled for an impossible mission" movie, a large amount of the running time is dedicated to putting together the team, and getting to know the individuals involved. There's none of that here--the movie begins with a 15-minute pre-credits sequence in which McKay and his team prove their worth by infiltrating a Confederate stronghold.

There's plenty of violence in KILL THEM ALL AND COME BACK ALONE, but it's more of the traditional Hollywood type. Seemingly hundreds of men are gunned down, but almost no blood and gore are shown, and there's no lingering on dead bodies. The numerous acrobatic stunts (which at times border on the cartoonish) are staged quite impressively. The infamous Euro Western trope of men throwing both arms in the air and spinning around when shot is performed so many times here that it appears almost balletic.

The story does bring to mind THE GOOD, THE BAD, AND THE UGLY, with disreputable characters scheming each other over Civil War gold, and a section of the plot taking place inside a Union POW camp. KILL THEM ALL AND COME BACK ALONE isn't anywhere near as majestic as GBU, but it's not supposed to be. It gives the viewer 100 minutes of enjoyable, escapist, mindless action, with no social or political concerns to get in the way. It's definitely a "guy movie"--there's not one single female character in the entire film!

Chuck Connors is of course best known as the star of THE RIFLEMAN TV show, which the MeTV Network has on permanent rotation. He's nothing like Lucas McCain here--his McKay is the typical spaghetti western character who will do anything to get rich. Connors here seems to enjoy playing such a cut-throat role. The only other actor that gets a chance to impress in the film is Eurocult movie veteran Frank Wolff as the Confederate officer who sends McKay and his crew on the mission--but, as expected, he can't be trusted either.

Kino presents KILL THEM ALL AND COME BACK ALONE in 2:35.1 widescreen. There's two versions of the movie on this disc--a 99-minute English dubbed version and a 100-minute Italian version (with available English subtitles). Honestly both versions are basically the same. For whatever reason, the English version is visually a bit more colorful and sharper than the Italian one, but both prints look quite good. The sound quality on the English dub (which nicely showcases the vibrant music score by Francesco De Masi) is also a bit better in my estimation. The only extras are a selection of trailers for other Euro Westerns released by Kino, and an audio commentary by Alex Cox (which I have not listened to yet).

KILL THEM ALL AND COME BACK ALONE won't make most lists of great Euro Westerns, but it is the perfect movie to pop in when you want to forget the real world and watch a series of well-executed action sequences.