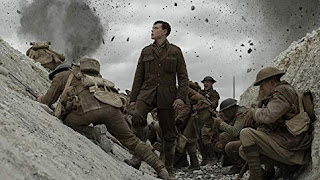 1917 is a brilliantly crafted and very riveting film. If I had seen it in December, I would have named it my favorite movie of 2019.

Director and co-writer Sam Mendes takes the relatively simple story of two British soldiers tasked to deliver an important message through enemy lines on the Western Front in World War One and makes it into a visual epic. The movie has extraordinary production design and meticulous background detail, which allows the viewer to fully experience the mud, blood, gore and devastation of the Great War.

The main star of 1917 is not any of the actors performing in it--it is the redoubtable cinematographer Roger Deakins, who provides a wealth of stunning images.

Much has been made of how 1917 is meant to look as if it is all one continuous shot. I honestly don't think the film needed to be produced in this way...it still would have been powerful without it. But I believe that Sam Mendes wanted to show how, for the regular soldier in any war, the conflict never really stops. Once you are well into watching the movie you don't even notice the effect (at least, I didn't). The only people that might be distracted by the lack of cuts are those who watch nothing but overly-edited action movies.

For all of 1917's visual splendor, it must be pointed out that the actors playing the two main characters, George MacKay and Dean-Charles Chapman, acquit themselves very well. The film also features cameos by Colin Firth, Mark Strong, and Benedict Cumberbatch.

There are many who have compared 1917 to Christopher Nolan's DUNKIRK. There is some justification in this--both films are about ordinary 20th Century British soldiers who face overwhelming obstacles in France. Some have said that 1917 is like DUNKIRK due to the fact that technical virtuosity outweighs characterization. 1917 and DUNKIRK are not meant to be nuanced character studies, they are films designed to enable audiences to experience incredible historical circumstances. 1917's story could have easily been told without any dialogue at all.

I'm not very much influenced by any modern movie awards, but 1917 deserves any prizes it gets. It absolutely is a film that needs to be seen on the big screen.