THE BRIGAND OF KANDAHAR

Britain's Hammer Films made a number of historical action-adventure pictures in the 1960s. Due to the company's typical low budgets, these films usually bit off more than they could chew, but for the most part they were decent entertainments.

THE BRIGAND OF KANDAHAR (1965) is one of the least of Hammer's cut-rate epics. It tries to be a rousing tale of Imperial India, but it come off as rather desultory.

The movie is set in the Indian Northwest Frontier of 1850. Captain Robert Case (Ronald Lewis) returns to Ft. Kandahar from a scouting mission, alone, to report that the officer with him, a Capt. Connelly, was captured by bandits and probably killed. Case's commanding officer (Duncan Lamont) doubts his word and suspects him of cowardice. Case has two major strikes against him--he's half-Indian, and he's been having an affair with Connelly's wife (Catherine Woodville). Case is to be court martialed, but he escapes with the help of a native servant. The servant leads Case into the hands of bandit chief Eli Khan (Oliver Reed). Case joins up with Khan to strike back at the British, but the bandit's cruel ways are too much for the former military officer. Case is egged on against Khan by the bandit's sister, the sultry Ratina (Yvonne Romain).

THE BRIGAND OF KANDAHAR was written and directed by John Gilling, who made some of Hammer's better films, such as THE REPTILE and THE PLAGUE OF THE ZOMBIES. Here much use is made of stock footage battles from other movies, particularly a film called ZARAK. The footage sticks out like a sore thumb (especially if one views this movie in HD), and it is not integrated very well. But the bigger problem is Gilling's contradictory script. The story tries to be critical of British imperialism, but at the same time has all the native characters be little more than one-dimensional stereotypes.

The contradictory tone extends to the lead character as well. The viewer isn't introduced to Case until after he comes back from his ill-fated mission and is accused of cowardice. The audience doesn't get a chance to know the fellow--we only have his word on what happened, for all we know he could be a liar and a coward. It doesn't help that Ronald Lewis (who had worked for Hammer before) is not very charismatic, and spends most of the movie with a brooding look on his face. To be fair to the actor, the script does him no favors--Case seems to have a chip on his shoulder, he is fooling around with another officer's wife, and technically he is a traitor. Lewis isn't able to project such a weakly-written character into a heroic bandit-warrior that a viewer would be interested in. Oliver Reed, with his dangerous attitude and natural intensity, would have been much better cast as Case.

One wonders if Reed also felt he should have been given the lead role, for he hams it up mercilessly as Eli Khan. (Reed has been quoted as saying that THE BRIGAND OF KANDAHAR was his worst film--trust me, he made plenty lesser ones). Reed's Khan acts too silly to be believable as a cunning leader of cut-throats. Khan and Case engage in a underwhelming sword duel at the climax. 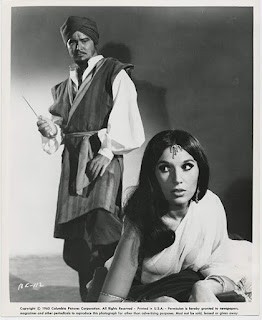 Ronald Lewis and Yvonne Romain in THE BRIGAND OF KANDAHAR


The most notable character is the delectable Yvonne Romain as Ratina. Romain has more sass and swagger than the rest of the cast combined. Her Ratina is plotting to take over the bandit tribe from her brother, and she uses Case to help her in this. Romain was able to make an impression without any dialogue in the beginning of THE CURSE OF THE WEREWOLF, but I think her performance here really showed that she could do more than look gorgeous.

Longtime Hammer veteran Duncan Lamont gets a bigger role than usual as the cold-blooded British Colonel, but the many other supporting actors the company regularly used are missing here. Considering that this is a film set in India, one expects George Pastell and Marne Maitland to show up, and they don't.

THE BRIGAND OF KANDAHAR winds up being a very mediocre film. One can blame the fact that it was built around a lot of stock footage. Even so, it shouldn't have been that hard to create a rip-roaring tale with an exciting lead character, even with a low budget.
Posted by Dan Day, Jr. at 8:53 AM