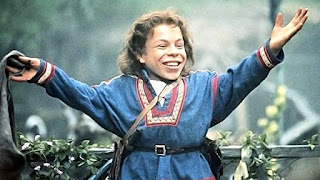 The 1988 fantasy-adventure film WILLOW has been back in the news recently due to info that there may be plans for a TV sequel. I never saw WILLOW in the theater--I must have only seen it on either videotape or on cable. I only saw it once, and it didn't make too much of an impression on me.

I decided to watch it again, using my Disney+ service. How does it hold up now, some 30 years later?

The one thing that comes out very clearly when viewing WILLOW is how derivative it is. Its influences are many--fairy tales, the Bible, sword & sorcery sagas, Disney animated movies, classic literature, and yes, STAR WARS (which itself has been accused of being plenty derivative). All stories are derivative in some way or another, but with WILLOW it almost becomes a game of picking out what reference the movie is channeling at a particular moment.

WILLOW was George Lucas' venture into fantasy-fairy tale territory, and he executive produced the film and provided the original story. Lucas teamed up with Ron Howard, who directed, and the pairing made a lot of industry headlines, with some venturing the opinion that the Lucas/Howard combination could be as successful as Lucas' collaboration with Steven Spielberg on the Indiana Jones series.

WILLOW was not a major box office hit upon original release, but (unlike what many would want you to believe) it wasn't a major flop either. It's a nice film, but it doesn't leave the big footprint one would expect from a George Lucas/Ron Howard teaming.

What WILLOW does remind one of most of all is THE LORD OF THE RINGS trilogy--I remember some critics said that it felt like a lighthearted take on Tolkien's work. Of course Peter Jackson's cinematic adaptation of LOTR wouldn't happen till years later, but there are individual shots in WILLOW that look almost exactly to what Jackson would put on the screen later on. There was even some location shooting done in New Zealand for WILLOW (the country is now famed for being the home of the LOTR movies).

The title character of Willow Ufgood, played by Warwick Davis, is very much reminiscent of Bilbo or Frodo Baggins. Willow is a dwarf-like creature who lives a quiet existence in a pastoral village among others of his kind, until his is unexpectedly thrust into a larger-than-life adventure. He discovers a baby girl, who has been hidden from a wicked Queen named Bavmorda. The girl is fated to be the one to end the Queen's evil reign. Willow travels to the land of the Daikini (regular sized humans) to return the baby to its kind, and gets involved in various adventures.

Along the way Willow meets up with a brash, conniving warrior named Madmartigan (Val Kilmer), the Queen's daughter Sorsha (Joanne Whalley), who eventually becomes an allay, a pair of inches tall creatures who are called "brownies", and a good witch. All these characters wind up helping Willow in his quest.

As stated before, WILLOW is a nice film, but there's nothing particularly outstanding about it. It's well-made, with many picturesque locations that Ron Howard takes visual advantage of. The story is a bit predictable, and at two hours, there are times when the pace begins to sag (especially when compared to the ultra-kinetic fantasy film product made today).

The main characters are somewhat generic, with Warwick Davis' Willow being the most interesting (the actor definitely would have made an acceptable Bilbo or Frodo). The one different element about Willow is that he is married with two children, and he loves and wants to get back to his family. Most main characters in heroic quest tales are unattached, and want to get away from their normal situation.

Val Kilmer's Madmartigan is supposed to be a charming, rogue-like Errol Flynn type, but he seems annoying rather than charismatic. Madmartigan and Joanne Whalley's Sorsha wind up having a "they act like they hate each other but they really don't" romantic relationship, which tries to remind the viewer of other Lucasfilm couples such as Han & Leia and Indy & Marion. The problem is their attraction for each other feels contrived, and ironically Kilmer and Whalley--who would marry in real life--don't have a lot of chemistry here.

It must be noted that Whalley's Sorsha is a strong, independent woman who can ride and fight, and makes up her own mind by going against her mother. (I thought we've been told female characters like this didn't exist before 21st Century cinema????) Unfortunately her choices in romancing Madmartigan and betraying her mother are not explored enough, making them seem arbitrary.

Jean Marsh as the evil Queen doesn't get enough to do to make an impression, and toward the end she starts resembling Emperor Palpatine. Somehow by killing the baby girl in a special ceremony the Queen will gain even more power to rule over the entire realm, but this isn't explained enough in the story (at least it wasn't explained enough to me). In WILLOW "magic" is akin to the Force.

As with most George Lucas productions, the attempts at comedy come off as silly. The two brownies (played by Kevin Pollack and Rick Overton) are to WILLOW as Jar Jar Binks is to the Star Wars prequels.

WILLOW has plenty of action scenes, and they are staged well, if not exactly inventively. The ILM special effects crew contributed some very early CGI, which a big deal was made of at the time the movie was released. The major CGI sequence was a morphing effect, which appears elementary today. A fire-breathing two headed dragon makes an appearance, courtesy of some stop-motion animation, but the creature is so goofy looking it doesn't present much of a threat. One of the movie's biggest strengths is the epic music score by James Horner.

I hope I'm not giving the impression that I didn't enjoy WILLOW. There's nothing inherently bad or disappointing about it--but it lacks that certain spark, that certain something that would make it a truly great film. Nearly everything in it reminded me of better stories. At times it tries to be a enchanting kids movie, at other times it takes on a muddy, grungy EXCALIBUR-like tone (the climatic battle takes place in a driving rain). It does have a good message--that even diminutive, supposedly unimportant folk like Willow can be heroes if they believe in themselves. It is a fine film for children--but I have to wonder how bored the kids of today would be with it.