Today's YouTube public domain theater entry is a cheap 1948 noir entitled PAROLE INC. One of the companies behind the movie was Eagle-Lion, formerly known as Producers Releasing Corporation.

The only notable thing about PAROLE INC. is that it stars Turhan Bey and Evelyn Ankers, two veterans of the Universal monster movie series. (Bey and Ankers had in fact already played a romantic couple in Universal's THE MAD GHOUL.) The duo are cast against type here--Bey is a shady lawyer with the unique name of Barney Rodescu, and Ankers is his girlfriend Jojo, who happens to run a diner that is the front for illegal activities.

The movie begins with a man swathed in bandages, laying in a hospital bed while dictating into a recorder. The man is a federal agent named Richard Hendricks (Michael O'Shea), and he is detailing a series of recent events. Hendricks was sent to an unnamed state to investigate misuse of the parole board. Disguising as a wanted man, Hendricks finds out that lawyer Barney Rodescu has paid off members of the parole board to get convicts off that he can use for his own purposes. Hendricks stops Rodescu's schemes, but not without cost (after all, the guy is laid up in the hospital).

PAROLE INC. was directed by Alfred Zeisler, who helmed the 1946 FEAR (which I covered a few posts ago). FEAR had a few unusual elements to it, but PAROLE INC. is directed in a very perfunctory manner. Hendricks' dictation turns into a full-length narration, and while this provides plenty of plot info, Michael O'Shea's somewhat generic recitation of it doesn't help matters. O'Shea was in one of the most famous public domain movies, LADY OF BURLESQUE. In that one he spent most of the time annoying Barbara Stanwyck, and in PAROLE INC. he still seems to have a smart-aleck type of manner. 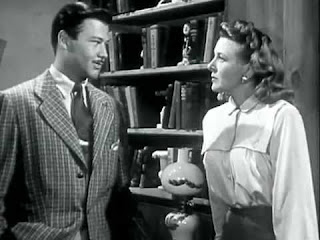 
Turhan Bey and Evelyn Ankers might have been happy to get out of the Universal thriller rut, but I doubt that they were too thrilled about being in PAROLE INC. Bey doesn't get all that much screen time, but he does make a different kind of B movie crime boss--erudite, classy, and sinister. Evelyn Ankers gets more screen time as Jojo, and she gets to do things such as act drunk, and flirt with Hendricks to try and get information out of him. It's not the usual type of role for Ankers, but she still winds up acting very ladylike (when she realizes that Hendricks is going to get it, she looks like she's about to let out one of her old Universal screams).

The only other notable actor in PAROLE INC. is Poverty Row veteran Lyle Talbot, who plays the local police commissioner (a few years earlier, he probably would have played the role of Hendricks).

The reason I watched PAROLE INC. was because Evelyn Ankers and Turhan Bey were in it. In all honesty this movie doesn't give them all that much more of a showcase than the Universal programmers they each appeared in. But it is nice to see Evelyn get to stretch her talents, even though she's probably the most proper bad girl in B movie history.