SECRETS OF THE FRENCH POLICE

In MORE CLASSICS OF THE HORROR FILM, there is a chapter entitled "Horror As a Bonus--Horror in the Non-Horror Film". In that chapter Everson examined a number of films from the early to mid-20th Century that were not considered straight horror features, but nevertheless had elements of the genre. One of the films the author mentioned was a 1932 RKO production entitled SECRETS OF THE FRENCH POLICE. Sometime in the early 1990s, I saw this movie on the AMC TV channel (back when AMC actually showed classic movies).

My long-ago AMC viewing was the only time I had seen SECRETS OF THE FRENCH POLICE, until TCM showed it this weekend. It's a wild pre-code potboiler which has enough plot for two movies, despite the fact that it runs a little less than an hour.

In contemporary Paris, a mysterious Russian named Moloff (Gregory Ratoff) is scheming to take control of the Romanov fortune. He intends to pass off a poor flower girl (Gwili Andre) as Anastasia, the young daughter of the Czar who supposedly survived the massacre of her family. Moloff's plot is stopped by cunning and determined French police investigator (Frank Morgan).

The basic plot description is simple, but the way the actual movie plays out is decidedly not. SECRETS OF THE FRENCH POLICE throws out a number of confusing strands that eventually come together. There's various violent deaths, intricate police procedure, and the evil Moloff's activities, which include taxidermy, scientific experimentation, and a personal hobby of turning some of his victims into statues and displaying them in his home.

Some of the sets used in RKO's THE MOST DANGEROUS GAME show up in SECRETS OF THE FRENCH POLICE, as do some of the costumes. Gregory Ratoff's Moloff could easily be a cousin of Count Zaroff. He could also be related to Bela Lugosi. Ratoff gets a few Bela-like closeups, and his Moloff also happens to be a master of hypnotism. Ratoff even recites his lines in a very slow and deliberate manner, much like Lugosi would at times. If Lugosi had played Moloff, SECRETS OF THE FRENCH POLICE would be far more renowned among film geeks today. 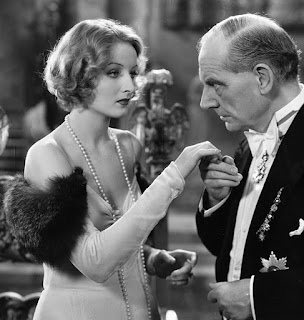 Gwili Andre in SECRETS OF THE FRENCH POLICE

The willowy Gwili Andre makes a very fetching damsel in distress, although it's hard to believe in her as a poor flower girl. Future Wizard of Oz Frank Morgan is surprisingly serious and determined as police official St. Cyr. Morgan does do some of his patented eccentric old man act when his character is undercover and in disguise. Morgan's St. Cyr would have been a great candidate for a detective film series of his own.

SECRETS OF THE FRENCH POLICE moves along at a rapid pace, and it has many clever ideas...but this is an example of a movie that isn't long enough. The climax in particular seems very rushed, and it doesn't have the effect that it should. One wants to know more about Moloff and his bizarre actions (his manor house in Paris feels like an old castle, and it comes with secret rooms and a underground laboratory). There's some definite Pre-Code kinkiness in the subplot of Moloff turning women into statues (at one point it appears one of his victims is naked). Moloff even intends to do the same thing to Gwili Andre at the end.

SECRETS OF THE FRENCH POLICE was directed by Edward Sutherland, who is better known for his comedy films, including several with W. C. Fields. (He also had a short marriage with Louise Brooks.) Sutherland indulges in a number of atmospheric camera set-ups, and he would soon get a chance to helm an even wilder Pre-Code horror, the notorious MURDERS IN THE ZOO with Lionel Atwill.

If you get a chance, check out SECRETS OF THE FRENCH POLICE. It's an unusual Pre-Code thriller which tries to do too much in about an hour, but that's better than not doing enough.
Posted by Dan Day, Jr. at 8:54 AM