SON OF A SAILOR

This month Turner Classic Movies is showcasing classic film comedian Joe E. Brown. One of his films the channel showed was SON OF A SAILOR, a 1933 title made by Warner Bros. The major reason I watched it was for the fact that Thelma Todd is in it...but honestly, I could have just skipped it.

Joe E. Brown was quite prolific in the 1930s, although looking at him from a 21st Century perspective it's hard to figure out why. He usually played a goofy, naive rube, and his films almost always took advantage of his athletic talent. He had co-starred with Thelma Todd in the bizarre 1931 movie BROADMINDED, which I wrote a blog post on a few years back. (I went into Brown's screen persona in that post a bit more as well.)

BROADMINDED is a truly weird Pre-Code, but it's far more entertaining than SON OF A SAILOR. As one expects from the title, Brown plays an ordinary member of the U.S. Navy named Handsome Callahan (I assume the "Handsome" moniker was meant to be sarcastic). Callahan has a habit of telling tall tales, and this constantly gets him into trouble. While on shore leave Callahan gets involved with an retired admiral's granddaughter, and a couple of spies who are after a device that can fly planes by remote control. Callahan bumbles his way through it all, and winds up getting promoted for his troubles.

Even at his best, Joe E. Brown is something of an acquired taste. In SON OF A SAILOR, he plays an annoying guy who is a braggart to boot....and here he just isn't funny (at least to me). The most interesting part of the story is the beginning, which was filmed on an actual ship, the USS Saratoga. Military buffs will appreciate seeing vintage naval activities, and the ship's layout allows director Lloyd Bacon to use a few off-beat camera setups. Once Brown gets off-ship, the movie slows to a crawl (it seems longer than its 74 minute running time). Brown's constant attempts to get dates with women onshore (by using variations of the same hackneyed story) come off as creepy instead of amusing.

Brown winds up running into the retired admiral's daughter (actually, she literally runs into him, with a car), and he gets invited to the admiral's fancy house party. It's there that Thelma Todd finally makes her first onscreen appearance, halfway into the film. She plays a character called "The Baroness", and she and the man who is her escort are planning to still the plans for the remote control flying device. Thelma sports dark hair for this role--apparently to make her look more exotic (even though she doesn't act or sound all that exotic). The only thing Thelma gets to do is spend a short sequence trying to distract Brown by coming onto him. It's the type of vamp role Thelma did several times in her short career, and the movie doesn't take proper advantage of her talents, despite the fact that she gets prominent billing in the credits and on the advertisements for the movie that I have seen. 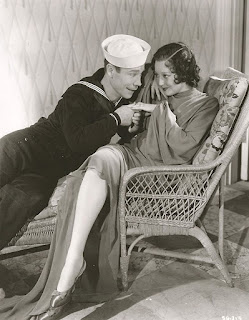 Joe E. Brown and Thelma Todd in SON OF A SAILOR

Even for a military comedy, SON OF A SAILOR is mediocre. Joe E. Brown does get to participate in a comedic boxing match, but the result is nowhere near as entertaining as similar sequences featuring other movie comics such as Buster Keaton, Abbott & Costello, and The Three Stooges. Thelma Todd fans will be disappointed by her small role here.
Posted by Dan Day, Jr. at 8:44 AM