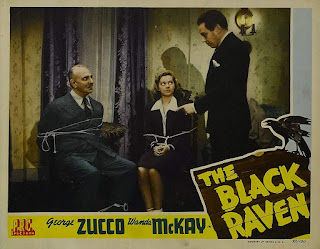 THE BLACK RAVEN (1943) is a mystery film with a rather obvious title--what else would they have called it...THE PLAID RAVEN?? It was made by the Poverty Row company Producers Releasing Corporation, and produced by Sigmund Neufeld and directed by Sam Newfield, frequent low-budget filmmakers (and brothers).

The fine character actor George Zucco gets top billing as Amos Bradford, a man who runs a remote inn near the New York state-Canadian border. Bradford uses the inn as a front for some shady activities, and on an obligatory dark stormy night, a number of suspicious people show up. There's a convict on the run (I. Stanford Jolley) who has a grudge against Bradford; a racketeer (Noel Madison) who wants to get across the border; a cowardly bank cashier (Byron Foulger) who has embezzled $50,000; a runaway couple intending to marry (Wanda McKay and Bob Randall); and the prospective bride's father (Robert Middlemass), who happens to be a crooked political boss. Also in on the festivities are Bradford's hulking but dopey handyman (Glenn Strange) and the local sheriff (Charles Middleton).

As expected, the $50,000 winds up missing, and the political boss is found dead. The sheriff wants to pin the murder on the victim's daughter's fiancee, since the men hated each other. Bradford is convinced the young man is innocent, and decides to solve the mystery for himself. Other murders follow, along with some other minor skullduggery....but, this being a cheap B movie, things sort themselves very quickly around the 60 minute mark.

THE BLACK RAVEN isn't an underrated classic, or one of those "so bad it's good" films. The most notable thing about it is the casting. Old movie buffs will appreciate seeing veteran weird guy actors like I. Stanford Jolley and Byron Foulger. Charles Middleton will be best known as the original Ming the Merciless in the FLASH GORDON serials. Wanda McKay is the only female in the cast, and she's quite cute, even though she doesn't have much to do. She appeared in two of the nine films Bela Lugosi starred in for Monogram in the 1940s.

The main attractions here are George Zucco and Glenn Strange, known for their participation in Universal's classic horror film series. Zucco and Strange had already co-starred in THE MAD MONSTER--in that one, Zucco's mad doctor turns Strange into a werewolf-like creature. In THE BLACK RAVEN, Zucco still has the upper hand--he's the boss, and Strange is his lackey. Strange gets to handle the comic relief in this picture, and despite his size and strength, he spends a lot of time being scared and doing pratfalls. Zucco and Strange have an almost Abbott & Costello-type relationship here--at one point Zucco is so frustrated by Strange's shenanigans he slaps him! It's bizarre to see a future Frankenstein Monster act so goofy--but it must be said that Strange does it rather well.

One wonders if the off-screen Zucco considered a movie like THE BLACK RAVEN beneath him. If he did, it certainly doesn't show onscreen. Zucco effortlessly outdoes all the other players by reacting to all the goings-on with an attitude of droll understatement. He makes his dialogue sound much better than it is with his dry delivery of it. Zucco even pulls off this line to Glenn Strange: "With your imagination, you could see the Statue of Liberty doing the conga!" I know for a lot of folks, the biggest joy of watching Poverty Row chillers of the 30s and 40s is seeing cult character actors ham it up, but Zucco goes the other way here. He even makes Bradford somewhat sympathetic, due to his concern for the young lovers (even though you suspect he's got some skeletons in his closet).

THE BLACK RAVEN is a perfect movie to watch on YouTube when you can't get to sleep. It won't take up too much of your time, and you might actually even wind up being amused by it.