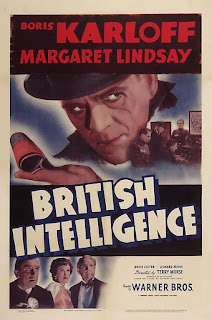 Boris Karloff had plenty of movies on release in 1940. That year he starred in films from Universal, Columbia, Monogram, and Warner Bros. The last movie on his Warner contract was BRITISH INTELLIGENCE, a very convoluted, very low-budget espionage tale set during World War One.

Karloff plays Valdar, a spy who has obtained a position as a butler in the London home of a British cabinet minister (Holmes Herbert). Valdar pretends to be a French refugee....but is he really spying for the Germans? Or is he a double-agent for the British? Or is he a triple-agent? The same could be asked for the character played by Margaret Lindsay, who is ordered by her German contacts to make contact with Valdar.

The hour-long film has plenty of plot--nearly every character in it is a spy--but it winds up being a confusing affair, and all the action comes from a lot of stock footage. Karloff's Valdar has a nasty-looking bayonet scar (Warners must have felt that Boris had to have some kind of facial makeup), and he pretends to have a limp and a French accent. Or is he pretending? Karloff and Lindsay's characters shift allegiances and attitudes so many times it's hard to figure out exactly who they really are.

Considering that this film was released in 1940, it's surprising that the story is set during WWI. Despite that there's plenty of dialogue foreshadowing WWII, and a German officer who goes off on a rant about how the Fatherland will one day in the future rule the world. This gives the picture a weird "We're going to comment on current events, but we're going to pretend we're in the past" feel.

Among the supporting cast are three actors who would appear in other Karloff films--Holmes Herbert, Lawrence Grant, and Lester Matthews. The movie does have nice cinematography by Sid Hickox, but stylistically it's not much different than the Mr. Wong features Karloff was starring in for Monogram. The director was Terry Morse, who ironically would be the man who handled the American version of the first Godzilla film.

Expert monster movie historians Greg Mank and Tom Weaver have both wondered if Warners had just wanted to end their contract with Karloff as soon as possible, since BRITISH INTELLIGENCE is such an underwhelming affair. One would think after the success of SON OF FRANKENSTEIN the studio would have given Karloff a much better role in a much better story. BRITISH INTELLIGENCE doesn't even give Karloff all that much screen time, and he spends most of it just skulking around and acting suspicious. Sadly, there were plenty of movies to come in which Karloff would essentially be only doing the same thing.