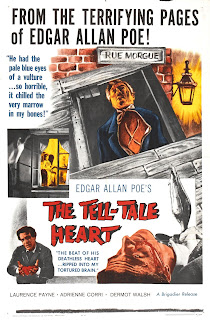 In his essential book ENGLISH GOTHIC, Jonathan Rigby declares, "....THE TELL-TALE HEART is something of a lost classic, albeit a minor one, of British horror." Having seen the film for the first time over the weekend, I wouldn't exactly call it a classic. This Edgar Allan Poe adaptation from 1960 was made in England, produced by the Danziger brothers, and directed by Ernest Morris. In black & white, and the recipient of a very low budget, THE TELL-TALE HEART makes the Hammer horrors and the Roger Corman Poe films made during the same period look like multi-million dollar productions.

Like most other movies based on the works of Poe, the script makes vast changes to the author's original tale. This version is set in the 19th Century, apparently in Paris--I say apparently because even though all the street signs one sees on screen are in French, all of the characters act English, and they all have English names.

Laurence Payne plays Edgar Marsh, a morose fellow who has almost no social skills. Edgar lives a lonely existence in an old domicile, until one day he notices a beautiful woman entering the boarding house across the street. The woman is named Betty (Adrienne Corri), and Edgar makes several embarrassing attempts to gain her affection. The worst mistake Edgar makes is introducing Betty to his only friend, the dashing Carl (Dermot Walsh). As soon as Carl and Betty look at one another, one knows that Edgar will be shunted aside fairly quickly. The pathetic guy still thinks that Betty is his, until he finds out the truth the hard way. Edgar gets Carl to come over to his house, and he kills him by savagely beating him with a poker. Edgar buries his former friend underneath the floor in one of his rooms, and tries to carry on as if nothing had happened...but the murderer keeps hearing the beating of a human heart, and Betty decides to do some investigating on her own.

Poe's original story "The Tell-Tale Heart" was very short, and it has very little material for a full-length film. This version fills things out by adding a love triangle (which, ironically, many of the Roger Corman Poe movies feature). But even that aspect is pretty thin for a 78 minute film. It's fairly obvious that Carl and Betty are going to get together, and one just waits for Edgar to exact his revenge. The murder sequence is quite grisly for the period, as is the scene where Edgar, driven crazy by the "beating" of Carl's heart, actually cuts the organ out and buries it outside. There's also a nice effect when the floorboards, and the lawn outside, appear to be "breathing" in rhythm to the supposedly beating heart. There's a lot to put up with, though, before and after these sequences.

The big problem is the character of Edgar. He's such a forlorn loser that one wonders how he's been able to function in society (he looks like he's about 40). The idea that a man about town like Carl would be his close friend seems hard to believe. It's also hard to believe that such a milquetoast as Edgar would be able to commit such a violent murder. These problems might not have been as notable if this had been a short subject instead of a full-length feature.

Genre veteran Adrienne Corri easily makes the biggest impression here, even though this is one of the most normal characters she ever played onscreen! Corri makes the audience's sympathy go to Betty--she tries to be kind to Edgar and not hurt him, but the dope just doesn't get it. At one point Betty sneaks into Edgar's house to do some snooping to find out what really happened to Edgar--and of course he comes back home, and Betty has to hide and sneak away from him, This sequence, and the various times that Edgar spies upon Betty as she's in her upper-floor apartment call to mind REAR WINDOW--even though this movie is nowhere near Hitchcock's class.

THE TELL-TALE HEART has a double-twist ending that calls to mind numerous episodes of classic TV anthology shows. It might have been better if this movie were cut down to about 30 minutes and shown on THE TWILIGHT ZONE or ALFRED HITCHCOCK PRESENTS. It doesn't have the flair or style of the Hammer or AIP Gothics.