CHESLEY BONESTELL: A BRUSH WITH THE FUTURE 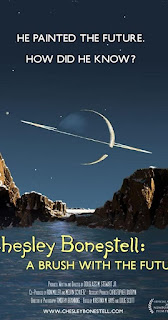 Chesley Bonestell (1888-1986) was a multifaceted and multi-talented individual. In his long life he was an illustrator, architect, matte painter, and a renowned graphic futurist. His drawings and conceptions of the solar system still inspire those working in the field of space exploration today. Bonestell is the subject of a 2018 documentary, CHESLEY BONESTELL: A BRUSH WITH THE FUTURE, which was written, produced, and directed by Douglass M. Stewart, Jr. I viewed it on the Tubi streaming channel.

Bonestell had an amazing career. He was a talented artist at a young age, but his family wanted him to become an architect. Bonestell's designs would have influence on many famous structures in San Francisco and New York City, including the Chrysler Building and the Golden Gate Bridge. Bonestell would move to Hollywood in the late 1930s and work as a matte painter at several movie studios (one of the films he did paintings for was CITIZEN KANE). After World War II, Bonestell began to do artwork depicting outer space, and he worked with George Pal on many science fiction films such as WHEN WORLDS COLLIDE and THE WAR OF THE WORLDS.

The documentary covers all of this, in a straightforward manner, with many renowned individuals shown on camera talking about how Bonestell has influenced them. Special effects artists such as Douglas Turnbull, Craig Barron, Ben Burtt, and Richard Edlund are interviewed, along with several scientists and other graphic artists.

The main highlight in the documentary are the brilliant paintings Bonestell created depicting the environs of outer space. They have a 21st Century feel to them--it's hard to believe that most of them were painted some 70 years ago. Bonestell's epic vistas of various planets and moons are stunning.

Bonestell's work is covered in great detail here, but the documentary only gives us a glimpse of the man himself. A few audio snippets and archival interviews with the man are shown, but very little of his personal side is revealed. The film does mention that Bonestell personally experienced the 1906 San Francisco earthquake, and suggests that may have had an impact on his more apocalyptic artwork. Bonestell's collaborations with Wernher von Bruan are also mentioned. (The documentary does point out that Bonestell, ironically, was not a science fiction fan--he was more interested in science fact.)

I had known who Chesley Bonestell was, and I had seen some examples of his artwork....but until watching this documentary I had no idea of the full scope and impact of his entire career in the arts. CHESLEY BONESTELL: A BRUSH WITH THE FUTURE is a fascinating documentary, especially for those who are interested in and inspired by true creativity.