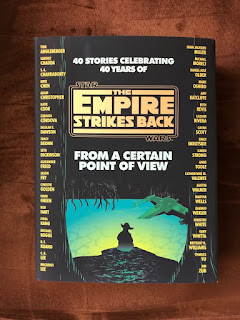 In 2017, Del Rey published STAR WARS--FROM A CERTAIN POINT OF VIEW, a book that celebrated the 40th anniversary of the film by featuring 40 stories that looked at the story from a different perspective. Now THE EMPIRE STRIKES BACK gets the same treatment. 40 stories by 40 writers, in roughly the same order as the timeline of the movie.

THE EMPIRE STRIKES BACK--FROM A CERTAIN POINT OF VIEW showcases various background characters and material. There's a chapter taken from the viewpoint of the wampa that attacked Luke in the beginning of the film, and also one featuring the "space slug" (the official Star Wars Universe name for the creature is exogorth). There are stories about General Veers and Admiral Ozzel, and we find out what Yoda was doing and thinking when Luke arrived on Dagobah.

Remember the guy who is trying to escape from Cloud City while carrying what looks like an ice cream maker?? He gets a chapter too (and it explains what that device he's holding was). The best story, in my opinion, is about how Obi-Wan's spirit feels while Luke trains with Yoda.

It appears to me that it was much harder to come up with 40 stories on EMPIRE than it was for STAR WARS. That may be due to the fact that the movie has a very focused plot--there's only three main locations, and most of the stories deal with two of them, Hoth and Bespin.

Nevertheless, this is for the most part a fun and intriguing read. This is a perfect holiday gift for a hardcore Star Wars fan, and no matter how many times you may have seen EMPIRE, reading this book will make you want to see it again.