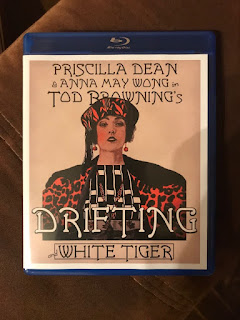 Earlier this month I covered DRIFTING, the main feature on a Kino Blu-ray that contains two silent films directed by Tod Browning. Today I'll look at the other movie on the disc, WHITE TIGER, which was made before DRIFTING but released after.

WHITE TIGER is very much a precursor to Browning's THE UNHOLY THREE. A trio of con artists, who have issues with one another, use a strange and unique gimmick to gain access to the houses of the wealthy in order to rob them. The trio then winds up at a remote cabin in the woods. The three crooks in WHITE TIGER are played by Priscilla Dean, Raymond Griffith, and Wallace Beery.

Raymond Griffith plays Roy, who runs a sideshow act involving a mechanical chess player. (It is Roy that gets inside the device and actually controls it.) Wallace Beery's shifty con man comes up with the idea of using the chess player as a way to steal from the rich, and Roy joins up with him and his "protegee", Sylvia (Priscilla Dean). Sylvia and Roy seem to have a special connection to one another--as well they should, since they are actually brother and sister (it was Beery's character that caused the death of their father and their separation from each other as young children). After a robbery, the three hole up in a remote cabin, where they are joined by a mysterious fellow (Matt Moore) who has an interest in Sylvia. All the characters' real identities are finally revealed, as is their fates.

Tod Browning himself came up with the scenario for WHITE TIGER, and it contains many elements the director would use throughout the rest of his career. Raymond Griffith is now known as a silent movie comedian, but here he's the leading man, and with his mustache and striped shirt, he greatly resembles other Browning characters played by John Gilbert in THE SHOW and Norman Kerry in THE UNKNOWN. Priscilla Dean doesn't get much of a chance to shine here--she plays yet another female criminal who is rethinking her life. Wallace Beery and Matt Moore play the same type of characters they portrayed in DRIFTING.

The most intriguing aspect of WHITE TIGER is the mechanical chess player, but it is only dealt with in the first half of the story. The second half consists of all the main characters stuck in the cabin, eyeing each other suspiciously. The movie bogs down quite a bit here, and the climax is somewhat disappointing.

The version of WHITE TIGER featured on this Blu-ray is from a 16mm print, and it is not in the best of condition--but one is able to now at least see it on official home video, and that's the important thing. WHITE TIGER has been given a new audio commentary, by silent film historian Bret Wood. It is an excellent one, with Wood analyzing Browning's penchant for using the same situations and elements over and over again. The music score provided here for WHITE TIGER is by Andrew Earle Simpson.

Another extra on this disc is the only surviving reel of the 1919 Browning film THE EXQUISITE THIEF. It stars Priscilla Dean as--you guessed it--a criminal, and the small amount of footage shows her robbing a swanky dinner party at gunpoint, and a night-time car chase. What is shown is enticing enough for one to wish the entire movie had survived.

I've stated several times in the past on this blog how exemplary Kino's silent movie video releases are. This one is no exception, with two rare films from a famous cult director. Kino has plans to continue to work with Universal in releasing more of that studio's silent movie catalog.