The number of films directed by Alfred Hitchcock that I have not seen are in the single digits--and that total went down with my recent viewing of DOWNHILL, made in 1927.

DOWNHILL was only Hitchcock's fourth film as a director, and it was his next feature after the highly successful THE LODGER. The star of THE LODGER, Ivor Novello, co-wrote the story for DOWNHILL, and he also plays the lead role.

Roddy Berwick (Novello) is the big man on campus at his English boarding school. He comes from a wealthy family, he's athletic and handsome, and he's popular. His life comes crashing down after he's accused of an indiscretion by a working-class girl, and he is expelled from school. Roddy didn't do anything, but he keeps quiet for the sake of his best friend. Roddy's father kicks him out of the house, and with no means of support, he winds up being an extra in a stage review. Roddy is bequeathed 30,000 pounds by his godmother, and he marries the play's leading lady (Isabel Jeans). The conniving woman cheats on Roddy and spends all his money, and soon he's in France, making a living as a gigolo. The youth ends up in Marseilles, begging for a ship passage back home, where he is reunited with his family.

DOWNHILL is nowhere near as exciting or inventive as THE LODGER. When Hitchcock would talk about DOWNHILL in later interviews, he would be somewhat dismissive about it. The movie has a very languid pace to it, and there isn't all that much to the plot--young rich guy gets into trouble, has to fend for himself, and has some bad experiences. Ivor Novello was quite good as the mysterious title character in THE LODGER, but his Roddy Berwick isn't captivating, and he's not the brightest bulb either. What hurts DOWNHILL the most is that Roddy's "degradation" doesn't seem all that degrading, especially for viewers that have actually had to do real work for a living. DOWNHILL does contain a theme that would crop up several times in Hitchcock's work--a well-to-do, attractive person being put through unusual and uncomfortable circumstances.

Hitchcock works in plenty of visual flourishes when he can, but at times it feels as if he's straining to inject some life into a slight story line. Roddy is constantly shown going "down"--on a staircase, an escalator, and a elevator. There's a number of point of view shots, and the film gets more expressionistic near the climax, as Roddy starts to have visions. The director of photography on this was Claude McDonnell, and there are a number of atmospheric shot compositions.

One major Hitchcockian moment is when we see a medium close-up of Roddy in a tuxedo. The camera moves back a bit to reveal that Roddy is actually a waiter, attending to a high-class couple....but then the point of view goes out even further, to show that all this is happening on a theater stage.

DOWNHILL will certainly be of interest to Hitchcock fans, but it is not the type of material that was best suited for him. The excellent print of the film that I saw courtesy of TCM ran almost two hours, and the entire tale could have easily been told in half that time. 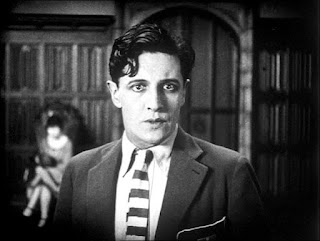