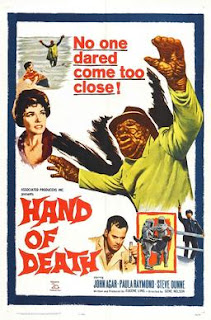 HAND OF DEATH is a 1962 sci-fi/horror film, released by 20th Century Fox. The movie stars John Agar, but instead of his usual act of fighting monsters, here Agar becomes one.

Agar plays Alex Marsh, a scientist who is experimenting with nerve gases. Marsh is a hardworking, determined fellow, and he winds up exposing himself to a chemical agent. Marsh discovers that he literally has a hand of death--if he touches anyone, or if anyone touches him, that person instantly dies. Marsh tries to get the head of the research facility he works for to find an antidote, but his situation gets even worse--his entire body becomes bloated and swollen, and his skin becomes blackened and cracked. Needless to say, this causes his girlfriend (Paula Raymond) great concern. Marsh wanders about for a while, with the police on his trail, before things come to a head at his girlfriend's beachfront home.

What's striking about HAND OF DEATH is that it was released by a major studio, and it was shot in Cinemascope--yet it is only an hour long, and looks and feels very much like the low-budget science fiction stories made in the mid-1950s. There's more talk than action, and even when John Agar finally gets into full monster mode, he doesn't really do all that much, except stumble about. (Apparently it really was Agar underneath the monster makeup.)

That makeup is the most memorable thing about the film (see picture below). Why Agar turns into such a creature--or why he has a touch of death to begin with--isn't really explained. In my research on this movie, many have commented on the makeup's resemblance to the Marvel comic book character The Thing, which was debuted around the time this film was being made. It's ironic that the makeup looks like The Thing, since Agar's transformation due to a series of strange gases is very much like the origin story of a number of comic book heroes and villains. 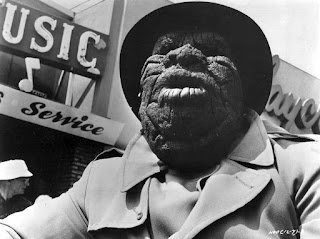 John Agar in HAND OF DEATH
The makeup is effective from a visual standpoint, but it doesn't allow Agar to express himself in any way, thus lessening any sympathy the viewer might have for him. Director Gene Nelson also has all the scenes with Agar in Thing mode take place in bright daylight, which makes the creature at times look silly when he shuffles about in everyday surroundings. A scene where Agar in his full makeup gets into the back of a cab and starts grunting at the driver comes off as unintentionally funny.
One wonders if the writer and producer of HAND OF DEATH, Eugene Ling, was influenced by THE FLY, which had come out a few years earlier. The relationship between workaholic Agar and his worried girlfriend Paula Raymond (who had appeared in THE BEAST FROM 20,000 FATHOMS) is reminiscent of that between David Hedison and Patricia Owens in THE FLY. Agar also tries to write a note asking for help while in full makeup, much like Hedison did in the earlier film. There's also a hint of the Karloff-Lugosi THE INVISIBLE RAY here, with the death touch, but a mention about Agar's jealousy over his girlfriend and a fellow scientist doesn't lead anywhere.
Among the supporting cast of HAND OF DEATH are Joe Besser, who acts as if he's still in a Three Stooges short, and the future Eddie Munster, Butch Patrick, who takes part in the old "innocent child inadvertently meets up with a monster" scene. Agar's lab assistant is played by John Alonzo, who would go on to become a distinguished cinematographer. Speaking of cinematography, the man who did it for HAND OF DEATH was Floyd Crosby, who makes the drab black and white settings look much better than they should have.
HAND OF DEATH has a intriguing-looking monster, but the script doesn't give him much to do, and the hour long story doesn't have enough time to develop any of the main characters. John Agar does his best (the scenes where he is angry over his plight reminded me of his performance in THE BRAIN FROM PLANET AROUS), but he's hindered by a monster makeup that doesn't give him a chance to show any emotion.