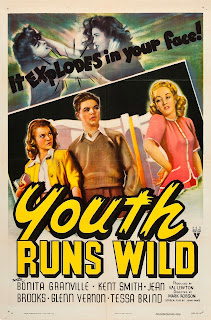 One of the few non-horror films Val Lewton produced during his tenure at RKO in the 1940s is a drama about juvenile delinquency called YOUTH RUNS WILD (1944). Like Lewton's terror tales, this movie has a very exploitative title....but the result is very non-exploitative.

According to my internet research, Lewton meant for this to be a serious examination of the problems that American youth was facing on the home front during WWII. RKO wasn't happy with how the original cut turned out, and the release version of the film was apparently much different than what Lewton and director Mark Robson wanted.

Despite the title of this movie, there's not a lot of youth running wild. The story concerns a young wife and her soldier husband, who is back home recovering from a war wound. (The couple is played by Lewton veterans Jean Brooks and Kent Smith.) The wife is worried about her teenage brother Frankie (Glenn Vernon), who has been missing school and getting into trouble. Frankie is in a romantic relationship with his next-door neighbor Sarah (Tessa Brind, later known as Vanessa Brown). Sarah has problems of her own--her parents work nights at the local defense plant, and they either ignore her or treat her like a servant. Frankie is put under the charge of his brother-in-law, and the soldier does his best to guide the youth and to find something for the other wayward kids in the neighborhood to do. Sarah is taken under the wing of a young woman by the name of Toddy (Bonita Granville), a tough-talking gal with a heart of gold, who "knows her way around". A tragedy ensues at the climax which causes Frankie and Sarah to grow closer together.

One wonders what Val Lewton's original version of YOUTH RUNS WILD might have been, because the movie that was released feels watered down and disorganized. Frankie and Sarah are not bad kids (they're squeaky clean compared to the rebel teenagers in 1950s films). The biggest problem they have is that they are treated condescendingly by all the adults they know, even the ones that try to help them. Whenever the story seems to move toward more darker elements, it shifts back to formulaic situations. The main problem the story presents is that young Americans during the WWII era lacked proper supervision...but there's an undercurrent of cultural and economic problems that the movie doesn't examine fully.

Fans of Val Lewton's RKO horrors will see plenty of familiar faces, such as Kent Smith, Jean Brooks, and even Elizabeth Russell as Sarah's defense worker mom (the viewer even gets to see Russell in work overalls). Bonita Granville (who had played Nancy Drew in the movies) gets the best role as the world-wise Toddy. At first she comes off as unlikable and sarcastic, but she shows her true colors by helping out the naive Sarah and giving her a sense of independence. Unfortunately Toddy winds up being "punished" for her too-smart girl ways in an ending which seems forced and arbitrary. Toddy's boyfriend, a sharpy who runs a shady gas station, is played by a young Lawrence Tierney, who effortlessly makes an impression with his very small role. (It seems that Tierney is going to be a major focus of the story, but he disappears for almost the rest of the running time soon after he's introduced.)

YOUTH RUNS WILD will be of interest to Val Lewton fans, and to those interested in the American home front during WWII. But due to apparent interference by RKO, the movie doesn't live up to expectations.