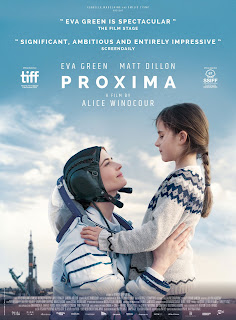 Green plays Sarah Loreau, who has been picked as a replacement to go on a space flight to the International Space Station. This is something that Sarah has wanted her entire life, but she has mixed feelings about how it will effect her young daughter Stella (Zelie Boulant). Sarah struggles to keep up with the intense training while dealing with being separated from Stella. She also has to prove herself to the self-assured American astronaut on the mission (Matt Dillon).

PROXIMA may be about astronauts, but this isn't a whiz-bang science-fiction tale with flashy technology. This is a quiet, intimate drama, about a woman's attempt to juggle a high-pressure complicated career with her family issues. Green gives a fine, strong performance as Sarah. The character is not a kick-ass super woman, she's a real person with real emotions. Green has great chemistry with the young actress playing her daughter--they really could pass as a parent and her child (which isn't always the case in movie families). What helps the film is that Zelie Boulant doesn't act like a "movie kid"--her reactions and interactions feel true to life. (Would this have held true if Stella was played by an American child?)

What's refreshing is that there isn't a romance tacked on to the story. Green's character has an ex-husband that takes care of their daughter while she's away, but he's not a major part of the film. Green is very much on her own here--at the beginning, she and Matt Dillon's character get off on the wrong foot, but they learn how to work together and respect each other....and no, there isn't any physical sparks between them.

PROXIMA has a very fact based tone to it (some of it was filmed at the European Astronaut Center near Cologne, Germany). At least, it seems fact based to me. The even-mannered, realistic attitude may come off as boring to some. I wouldn't say the movie had me riveted, but it did hold my attention, mainly due to Eva Green in the lead role.

(By the way....while looking for a image to attach to this blog, I saw one poster that had Matt Dillon's face as big as Eva Green's....this is an absolute misnomer, Green is the real star here, Dillon just has a supporting role.)