THE CURSE OF FRANKENSTEIN On Blu-ray From Warner Archive 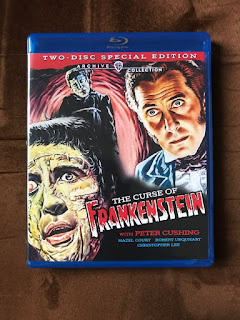 Despite all the horrid things that happened in 2020, fans of Hammer Films couldn't complain about the many home video releases of the famed company's product. Shout Factory continued its Hammer series, and Mill Creek released a 20 film Blu-ray set of Hammer movies made for Columbia Pictures. The Warner Archive Collection, however, topped everyone this year with its two-disc special edition release of THE CURSE OF FRANKENSTEIN. This is the first time the movie has appeared on a North American Blu-ray.

THE CURSE OF FRANKENSTEIN should be quite familiar to readers of this blog. Its impact on the history of fantastic cinema cannot be underestimated. First color Gothic horror film made by Hammer....first true horror film directed by Terence Fisher....first "real" Peter Cushing-Christopher Lee movie...THE CURSE OF FRANKENSTEIN should have been released on Region A Blu-ray a long time ago.

Thankfully Warner Archive didn't just slap the movie on a disc and leave it at that. The WAC gave CURSE a release befitting its importance. The print used on this Blu-ray has been restored and remastered from 4K scans, and viewers get three aspect ratios to choose from. Disc One has the movie in either a 1.85:1 or 1.66:1 widescreen ratio, while Disc Two has a standard 1.37:1 "open matte" version. (Why include a standard frame version? The folks at Warner Archive point out that for many years, this was how the movie was seen on TV, and they're right--it's how I saw it for the first time on the "Son of Svengoolie" program in the mid-1980s.)

And how does this spiffed-up CURSE look? I'd have to say it looks very well indeed. There are times when the print appears a bit soft in the early parts of the film, but it is brighter and more colorful, and I was able to discern much more background detail, including things I don't remember noticing before--and I've watched this movie dozens and dozens of times. What really stood out for me was the laboratory scenes and the outdoor sequences. There's a new sense of overall clarity and vitality to this film now, and the sound quality has been improved as well.

Warner Archive also saw fit to include some pertinent extras. If the presentation of CURSE on this Blu-ray reminds you of the Shout Factory Hammer releases, it's no surprise--Constantine Nasr, who worked on the Shout Factory series, prepared the extras here.

Four featurettes analyzing the film are on Disc Two. Hammer expert Richard Klemensen discusses the impact of CURSE, and how it changed the direction of Hammer Films. Another program has music composer Christopher Drake delving into James Bernard's original score for CURSE, and his other work on Hammer's Gothic horrors.

Cinematographer David J. Miller gives an insightful talk on Jack Asher and his expert lighting techniques on CURSE and other Hammer productions. The best of the extras has the esteemed Sir Christopher Frayling discussing THE CURSE OF FRANKENSTEIN and the English Gothic tradition (one wishes that Frayling had been able to do an audio commentary for the film). The four programs run around 20 minutes each (my only complaint on them is that they weren't longer).

There's a new audio commentary, and if you've bought any Hammer Blu-rays recently, you can probably guess who does it....yes, it's Constantine Nasr and Steve Haberman. The two had access to earlier versions of CURSE's script, and they compare these versions with what actually wound up in the film. There's also a very tacky-looking trailer (which I'm sure most Hammer fans have seen plenty of times).

Warner Archive deserves credit for realizing how important THE CURSE OF FRANKENSTEIN is, and how it needed a restoration and proper extras to accompany it. Now, film geeks are wondering.....will the other Hammer Films controlled by Warners also be given the special edition treatment?? Their recent Blu-ray release of HORROR OF DRACULA featured a very dark looking print, and absolutely no extras whatsoever--that one certainly should get an updated release, along with the 1959 THE MUMMY and DRACULA HAS RISEN FROM THE GRAVE.

Whether or not the WAC puts out any more special editions of Hammer films, their release of THE CURSE OF FRANKENSTEIN is a must-buy, and it is one of the best Blu-ray packages of the year.