Season Two Of THE MANDALORIAN 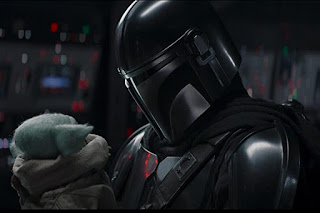 One good thing about 2020 was the second season of THE MANDALORIAN.

The first season of the show was great--but it wound up being an appetizer for Season Two. This year the show expanded its horizons, giving more of an examination of the post-RETURN OF THE JEDI Star Wars Universe. The Mandalorian is no longer a mysterious loner--he's a man with firm friends and relationships, and he's fully entangled in the conflict between the New Republic and the remnants of the Galactic Empire.

Season Two brought in all sorts of characters from throughout the various incarnations of the Star Wars Universe, including Boba Fett, Bo-Katan, Ahsoka Tano, and an appearance from a major character in the season finale. If a fan was unsure about this show's place in the Star Wars catalog before, there's no doubt it's an important part of the franchise now.

Executive producers Jon Favreau and Dave Filoni, along with various directors such as Robert Rodriguez, have given THE MANDALORIAN a feel and texture that perfectly matches that of the Original Star Wars Trilogy. Obviously there's a fair amount of CGI involved in the making of this series, but there's not a sense that the show is inundated with it. The special effects and action sequences have a physical reality to them. The show is more interested in good storytelling than in-your-face over the top spectacle.

The series is helped tremendously by the streaming format. Because the episodes do not have to fit into a certain time frame, the stories can be 30, 40, or 50 minutes long....whatever length is necessary for a particular tale. They don't have to be lengthened or shortened to fit into any pre-arranged slot. This gives the creators behind each episode far more freedom than the staff of a typical network TV show.

The Third Season will have some intriguing possibilities, even without fan favorite Grogu. Actually having the character leave the Mandalorian to undergo Jedi training was a smart idea--Grogu is so hot on social media right now that inevitably his popularity would start to wane eventually. Hopefully more of the post-ROJ society will be explored.

As for the news that Disney is planning ten new Star Wars series....that's definitely overkill. Of course there's no guarantee that all of these shows will even wind up being made. And even if they are made....the chances are that only a few of them will turn out to be good. Did Disney learn anything by having a new Star Wars film come out five years in a row?

I've said this before, and I'll say it again--anything connected to Star Wars should be special, like ice cream. No matter how much you love ice cream, if you had to eat it 10 times a day, over and over again, you'd get tired of it. Luckily, THE MANDALORIAN continues to feel special, and it gives Star Wars fans a true sense of hope.