POSTMAN'S KNOCK is a 1962 British comedy starring Spike Milligan, about--what else--a hapless postman. The main reason I watched the film was that the major female role was played by one of the leading ladies of English Gothic cinema, Barbara Shelley. (It was no less than Veronica Carlson who made me aware of this movie.)

Spike Milligan plays Harold Petts, who is quite content with his job running the mail service in a small English country village. Petts gets transferred to London, however, and things change mightily for him. The well-meaning fellow gets involved in one fracas after another, and his superiors don't know what to do with him. Petts proves his worth by stopping a gang of bumbling mail thieves.

Spike Milligan is best known for being part of the famed creative comedy team The Goons, but there's nothing very inventive about POSTMAN'S KNOCK. (Milligan is given credit for "additional dialogue", but one wonders how much real input he had on the production.) POSTMAN'S KNOCK has a very generic story line: goofy but decent-minded lead character screws up constantly, and annoys everybody, but he proves his worth in the end, and he winds up with a beautiful girl as well. It's the type of comedy story that has been used hundreds of times, by such people as Red Skelton, Jerry Lewis, and Adam Sandler (and no doubt will be used many times in the future).

This type of story can be funny, depending on how the situation is set up and how fresh the approach is. In POSTMAN'S KNOCK the approach comes off as labored. The lead character is so dopey at times that one wonders how he's been able to be a fully functioning adult all along. The rest of the cast (except for Barbara Shelley) acts as silly and broadly as possible, in an effort to be funny. The movie isn't helped by Ron Goodwin's too-obvious music score, which sounds like it should be backing a Tom & Jerry cartoon. 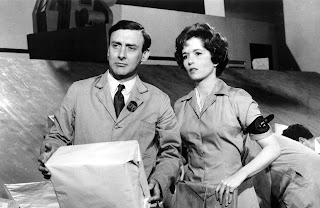 Barbara Shelley's character is not just the only major female role in the film, she's also the most normal-acting person in it as well. She plays an unsuccessful artist who encounters Petts, and takes him on as a boarder in her flat. At first she's annoyed by him, then she feels sorry for him, and by the end of the film she feels affection toward him (why doesn't that work in real life for guys like me?). Shelley seems to have wandered in from the set of another picture, and one senses she wasn't too happy dealing with all the silly antics going on around her. She's still as attractive as always, although she isn't able to show off her gorgeous red hair, due to the movie being in black & white.

POSTMAN'S KNOCK was filmed at the MGM Borehamwood Studios (apparently the company was hoping that Milligan would become a star like fellow Goon member Peter Sellers). Film buffs who watch this will notice many eccentric English character actors such as Warren Mitchell and Miles Malleson.

I'm a big slapstick fan, but the attempt at it in POSTMAN'S KNOCK lacks pace, rhythm, and characterization. It was interesting, though, to see Barbara Shelley in modern clothes, and her playing a regular person.