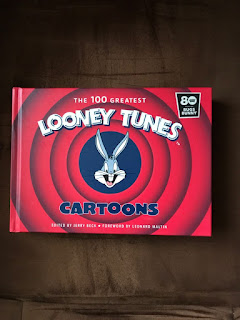 One of the major reasons I am such a classic film buff is that I watched the cartoons made at Warner Bros. from the 1930s to the 1950s every day as a kid for years. I watched plenty of other cartoons then--Tom & Jerry, the various Hanna Barbera series, Disney--but Looney Tunes and Merrie Melodies were by far my favorite. As a young kid I couldn't define why, but there was something about the pacing, the style, and the attitude of the Warner Bros. cartoons that made them stand out. Every other company's cartoons seemed to move in slow motion compared to Looney Tunes.

MeTV is now showing a selection of Looney Tunes early in the morning on weekdays (unfortunately I'm at work during this time, and no, I don't work from home). I don't know how long MeTV will be doing this, since we're now in the middle of a "Everything is offensive" pandemic, but it's great to know that some young folks out there might be exposed to some of the greatest animated works ever produced by a Hollywood studio.

A recent book entitled THE 100 GREATEST LOONEY TUNES CARTOONS takes on the task of ranking the best animated shorts made at Warner Bros. It's a challenging task indeed, seeing as how Warners made hundreds and hundreds of different cartoons over a period of decades.

The book is edited by Jerry Beck, an animation historian and Looney Tunes expert. The 100 cartoons that were chosen as the best are given at least two pages each in coverage, with stills from the particular cartoon, a credits list, a plot summary, and analysis from either Beck or a number of people who are animation experts or who work in the industry, such as Paul Dini and Rob Coleman. Film historian Leonard Maltin provides a forward.

The usual suspects make the list, such as WHAT'S OPERA, DOC?, BASEBALL BUGS, ONE FROGGY EVENING, and the "Duck Season, Rabbit Season" trilogy. A few surprises do show up here, including the infamous COAL BLACK AND DE SEBBEN DWARFS (Beck gives clear reasons why this one made the cut). Over 75% of the cartoons on this list were directed by either Robert Clampett, Chuck Jones, or Friz Freleng. A third of the list is made up of entries that feature my all-time favorite cartoon character, Bugs Bunny.

The book has a colorful design, and the text is concise and easy to read. (If anything I wanted more info and analysis on each cartoon chosen.) This book may be about cartoons, but it isn't written for very young readers.

That brings up something that people today still don't understand--these cartoons were not specifically made for kids. They were made to be entertaining for all types of audiences, and I believe that is why they still are so watchable today, and always will be. Certainly some of the references in the cartoons will go over the heads of a lot of folks, but overall the entire Looney Tunes catalog contains some of the most creative and inventive works ever to come out of a Hollywood studio. It's amazing how much impact these cartoons have had, considering they were made with very little time and money, and without any digital effects at all.

I enjoyed this book immensely, mainly because it brought back so many memories for me. There were a few cartoons listed that I have not seen in a long time, but it only took a glance at a still from one for me to remember almost the entire short. Reading THE 100 GREATEST LOONEY TUNES CARTOONS made me want to see every single one of them all over again.