THE BRIDES OF DRACULA Novelization 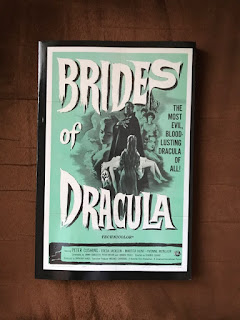 I've been a fan of Hammer horror films for a long time....but until recently I had never read any of the various novelizations based on the company's movies. These books were released in the 1960s and 70s, and some of the original paperback copies fetch a high price on the internet.

A few weeks ago I purchased a reprint of THE BRIDES OF DRACULA novelization. This version was published by Bear Manor Media. It contains the complete original novel, attributed to Dean Owen, and a introduction by Richard A. Ekstedt. Ekstedt explains that Dean Owen was actually a pen name for an American author named Dudley Dean McGaughy, who wrote a number of movie tie-in novels.

One major change is that the mysterious character (played by Michael Mulcaster) who hitches a ride on the coach transporting Marianne at the beginning of the movie BRIDES has a more substantial role in the novel. In the book the character is named Latour, and he functions as sort of a sinister thug for the Meinster family. (Latour is to the Meinsters what the character Klove would be to Dracula in later Hammer films featuring the Count.) Dr. Van Helsing also has a helper in the novel, named Jacques.

Van Helsing also gets to, shall we say, enjoy himself more in the novel. Let me describe a sequence in the book to you. Remember in the film version of BRIDES that Van Helsing first discovered Marianne passed out in the forest after she had ran away from the Chateau Meinster? In the novel, Van Helsing finds her...naked (Baron Meinster was getting ready to attack her, but the sun started to come up). Van Helsing wraps her in his cloak, and starts to carry her off. He then gets into a knock-down brawl with some villagers, finally gets Marianne back to the Running Boar Inn...and then the couple have sex. (How do you think Terence Fisher would have handled all of that??)

The real difference between the BRIDES novel and the BRIDES movie is not so much the plot, it's the tone. The book comes off like a trashy potboiler, due to Dean Owen's mediocre writing style. Consider how the author describes Marianne on the very first page: "The damp cloak could not hide the abundant curve at breast and hip." Owen also finds about a half-dozen more ways to mention Marianne's breasts throughout the story.

What struck me about this book is, when you take away all the usual Hammer accouterments--the actors, the production design, the costumes, the sets, the cinematography, Terence Fisher's direction--you're left with a vampire story that doesn't exactly jump off the page at you. THE BRIDES OF DRACULA is my favorite Hammer horror film, but if I had read this novelization first, without having seen the movie, I probably wouldn't have been that interested in seeing it at all. The film is a magnificent Gothic fairy tale, while the book doesn't come anywhere near that description.

What made Hammer movies special was definitely on the screen, instead of the page. In this instance the book is certainly not better than the movie. From a long-time Hammer fan's perspective, it's intriguing to read one of these novelizations--it is part of the company's history--but I don't think I'll be going out of my way to gather up a collection of them.