THE DARK HOUR (1936) is another one of those hour-long low-budget B movie mysteries. This one was produced by the Chesterfield company, and directed by future Abbott & Costello veteran Charles Lamont. The most notable thing about this movie (in my mind at least) is that it features three Universal horror players: Irene Ware (1935's THE RAVEN), E.E. Clive (THE INVISIBLE MAN), and Michael Mark (FRANKENSTEIN).

Young, attractive Elsa Carson (Irene Ware) lives with her two elderly and miserly uncles, Henry (William V. Mong) and Charles (Hobart Bosworth). Elsa doesn't like her uncles, but she stands to inherit their fortune when they pass away. Henry kicks Elsa's boyfriend, police inspector Jim (Ray Walker) out of the house--and later that night, the old grouch is found dead, stabbed in the back while sitting at his desk. There's plenty of suspects--Elsa, Jim, the suspicious butler (E.E. Clive), a chemist who is engaged in mysterious experiments, and Elsa's spirited aunt (Hedda Hopper). The butler is soon killed under similar circumstances, and Jim investigates the murders, along with a retired police officer who happens to be a neighbor of the Carsons  (Berton Churchill).

THE DARK HOUR gets off to a quick start, with Uncle Henry getting killed off in the first ten minutes. It then bogs down for a while, with the two investigators constantly asking questions of the entire cast, in scenes generically handled by director Lamont. Things pick up a bit when a prowler played by Michael Mark is discovered--it's found out that the man has lost his wife and son in a tenement fire, a building owned by the Carsons. Mark (who is very good in the role) even gets his own flashback showing him watching the fire. 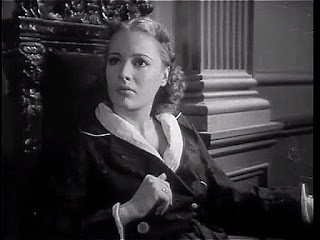 Irene Ware in THE DARK HOUR

When the murderer is found out, it is a bit of a surprise. But...there's even more of a surprise, because there's a twist ending, in which the real murderer is revealed, after a sort-of shell game is played upon the viewer.

THE DARK HOUR might have been helped if the investigators had been more interesting. Ray Walker and Berton Churchill are okay in the roles, but there's nothing that makes them stand out, other than that both of them are also suspects, and they are both trying to protect women that are also under suspicion (Churchill is fond of Hedda Hopper's character). Irene Ware (who looks quite different here than she did in THE RAVEN) spends most of her time being worried and anxious.

THE DARK HOUR is no great shakes, but it's worth sitting through due to the ending, which unloads a number of surprises on the viewer.