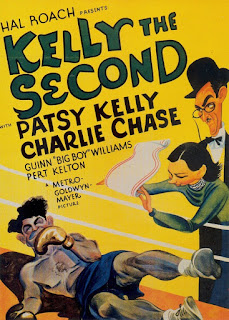 KELLY THE SECOND (1936) is a comedy produced by Hal Roach, and released by MGM. As someone who has watched Hal Roach product since I was a kid, I had to take the opportunity to watch this for the first time when it was shown recently on TCM.

The movie tells the story of Molly (Patsy Kelly), who attempts to train a brawling truck driver (Guinn Williams) into becoming a successful professional boxer. Molly is helped in this endeavor by her boss, drug store owner Doc Klum (Charley Chase), and a dopey gangster (Edward Brophy).

In the late 1930s, Hal Roach began to move away from his popular short subject comedy films and began to focus on feature-length movies. KELLY THE SECOND showcases Roach stars Patsy Kelly and Charley Chase. Patsy had just finished a series at Roach with Thelma Todd (who tragically died in December of 1935.)

Like many Roach full-length features, KELLY THE SECOND feels like a two-reeler stretched out to have a longer running time. It actually comes off like a longer version of the Three Stooges short PUNCH DRUNKS. Like Curly Howard in that earlier film, Guinn Williams is a boxer who does his best fighting when he hears a particular piece of music--in his case, it's "The Irish Washerwoman". There's plenty of gags about Kelly trying to "train" Williams at a farm, and a subplot on how the dopey gangster's girlfriend (Pert Kelton) tries to vamp the naive boxer. (Pert Kelton had filled in for Thelma Todd by appearing in a Roach short with Patsy Kelly after Todd's death.)

One's enjoyment of KELLY THE SECOND will probably be measured by how one reacts to Patsy Kelly's shrill on-screen personality (I personally feel she was much better as a supporting player, or at least paired off with someone). Charley Chase actually has as much screen time as Kelly does, and he comes off very well as the milquetoast Doc Klum. (I think Chase would have made a fine comic character actor in feature films.) Ironically this was Chase's last film with Hal Roach. Charley and Patsy do get a chance to show off their dancing talents.

If Thelma Todd had not died, she certainly would have been involved in this picture....and it's a sure bet the story would have turned out far differently. (One could surmise that Thelma would have played the Pert Kelton role, but I have a feeling she would have been helping Patsy in the boxing scheme.) Patsy Kelly would later star in another full-length film for Hal Roach, with another of Thelma Todd's replacements, Lyda Roberti. The movie was NOBODY"S BABY (1937), which I have not yet seen.

Gus Meins, a Hal Roach veteran, directed KELLY THE SECOND, and "Our Gang" fans need to know that Carl "Alfalfa" Switzer has a cameo.

KELLY THE SECOND is an okay comedy, certainly not on the level of the Laurel & Hardy features made by Hal Roach. If you've watched enough slapstick from 1920s and 30s Hollywood, you can anticipate almost all of the gags. There is, however, one priceless line of dialogue--"Is there an Irishman in the house??"