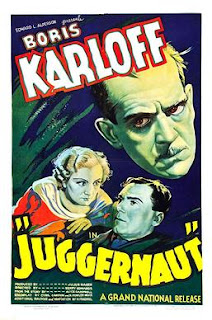 This is a film that was new to me. It is one of Boris Karloff's most obscure films, and for good reason. In his fine book ENGLISH GOTHIC author Jonathan Rigby describes the movie as a "ho-hum melodrama", and he's right on the mark.

Boris Karloff spent most of the year 1936 in his native England. He quite enjoyed being away from Hollywood, and he took time to engage in several pastimes. He also did some acting work while there, making two films. The first, THE MAN WHO CHANGED HIS MIND, is an unusual and well-done mad doctor tale. JUGGERNAUT is not a science-fiction or horror story, despite the fact that Karloff plays a obsessed scientist.

Karloff plays the splendidly named Dr. Sartorious, who is researching a cure for paralysis. The doctor is based in Morocco, but his funding has been cut off, so he accepts an offer to take up practice in the south of France. Sartorious is approached by Lady Clifford (Mona Goya), the much younger wife of the wealthy, elderly Sir Charles Clifford. Lady Clifford offers the doctor 20,000 pounds if he takes over the "care" of her ailing husband. Sir Charles soon dies, and the man's son from another marriage, and Sartorious' nurse, become suspicious enough to investigate what happened. Lady Clifford's plans to inherit her husband's fortune, and Sartorious' plans to continue his research, are soon thwarted.

Karloff is the above the title star of JUGGERNAUT, but he really has a supporting role. Most of the film (which lasts a little over an hour) concerns the situation around the Clifford family. Lady Clifford has a lover, a broke playboy, and Clifford's son develops a relationship with the nurse. These characters are very generic, and the actors who play these roles perform in an overly dramatic manner, Mona Goya in particular as the glamorous and scheming trophy wife.

The only actor of interest here is Karloff, but he doesn't have all that much to do. Sartorious is a determined, brooding fellow who lacks the social graces, and he spends most of his time in the laboratory (Karloff barely interacts with the rest of the cast). Karloff would go on to play many scientists like this in the future, but those men at least had a fantastical angle to their proceedings. There's nothing of the fantastic in JUGGERNAUT--it's a poor man's Agatha Christie, without any mystery (the audience knows all too well what is going to happen). Sartorious's solution to his predicament when everything is revealed is surprising, and rather abrupt (it's also an act that probably wouldn't have been allowed in an American-made film).

The direction, by Harry Edwards, is very uninspired, and the movie is hampered by a music score that is as over-the-top as Mona Goya's acting.

You can't help but wonder why Karloff involved himself in JUGGERNAUT. (My theory is that he used the filming as excuse to spend more time in England.) For those who are fans of Boris, and who have not seen this movie, it is one of the least entertaining titles the actor appeared in.