My Ten Favorite Movie Quotes Of All Time

Every time I do one of these lists, I always think of about 20 different items I left out. I'm sure I'll feel the same way about this. I've also tried to keep it clean, which just about eliminates every line of dialogue used in the last forty years. I'll probably do a post in the future containing more of my favorites. But for now....

10. "Asteroids do not concern me, Admiral."
From THE EMPIRE STRIKES BACK
Spoken by James Earl Jones as the voice of Darth Vader

9. "To a new world of Gods & Monsters!"
From BRIDE OF FRANKENSTEIN
Spoken by Ernest Thesiger as Dr. Pretorious

8. "Asps! Very Dangerous! You go first."
From RAIDERS OF THE LOST ARK
Spoken by John Rhys-Davies as Sallah

6. "Your love of the halflings's leaf has clearly slowed your mind."
From THE LORD OF THE RINGS: THE FELLOWSHIP OF THE RING
Spoken by Christopher Lee as Saruman

5. "HE HATES THESE CANS!!!"
From THE JERK
Spoken by Steve Martin as Navin Johnson

4. "And what do I have? Nothing but you egg sucking, chicken stealing gutter trash with not even 60 rounds between you. We're after men...and I wish to God I was with them."
From THE WILD BUNCH
Spoken by Robert Ryan as Deke Thornton

3. "But I was going into Toshi Station to pick up some power converters!!"
From STAR WARS
Spoken by Mark Hamill as Luke Skywalker

2. "When you have to shoot, shoot...don't talk!"
From THE GOOD, THE BAD, AND THE UGLY
Spoken by Eli Wallach as Tuco 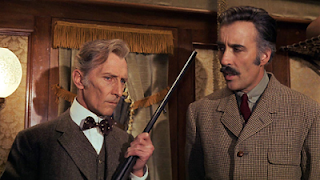