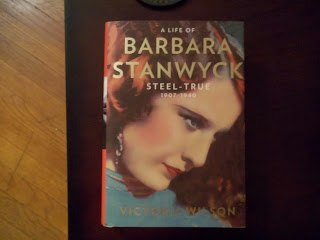 When I first started getting into classic films, the list of women who were universally considered the "greatest actresses of all time" had names like Bette Davis, Greta Garbo, and Katharine Hepburn. In recent years Barbara Stanwyck's reputation has grown so much that now she is on that list as well. The increased attention to Stanwyck's career is due to the recent availability of most of her early screen work on home video, and constant showings of her films on TV stations such as Turner Classic Movies. Despite Stanwyck's legendary status, there's really hasn't been a lot of books written about her. Victoria Wilson's mammoth A LIFE OF BARBARA STANWYCK--STEEL-TRUE 1907-1940 attempts to be the ultimate biography on the subject.

Wilson's work is over 1000 pages long. It contains a full Stanwyck movie chronology, as well as a stage, radio and TV chronology. It has over 80 pages of notes--it's obvious Wilson has done a voluminous amount of research--and it only covers the first 33 years of Stanwyck's life. There's also hundreds of photos, some of them very rare (unfortunately a number of images have very little to do with Stanwyck).

The book starts out with the ancestral history of Ruby Stevens (Stanwyck's birth name), goes on to document her tough childhood, her teenage years as a stage dancer and showgirl, her change of name and her success on Broadway, and her eventual move to motion pictures, where she soon became popular due to her work with directors Frank Capra and William Wellman (those two, more than anyone else, should be given credit for helping establish the Stanwyck screen persona).

Wilson also goes into Barbara's tempestuous relationship with her first husband, Frank Fay, and her adoption of a baby boy. Stanwyck is portrayed as a hard-working, determined professional, without pretense and not fitting in well with the glamour world of 1930s Hollywood. After Barbara finally divorces Fay, she meets up-and-coming young star Robert Taylor, and the two begin a romance. The book ends just as Stanwyck is getting ready to make MEET JOHN DOE with Frank Capra.

Wilson's book is certainly a major undertaking, and I have to give her credit for that. However, I have to say that, in my opinion, I don't think it is the definitive book on Stanwyck. The reason why is....there's almost more content in this book about other people than there is about Barbara Stanwyck.

Whenever a person of some renown happens to cross Stanwyck's orbit, Wilson gives that person a detailed backstory, usually with several anecdotes. And it's not just other performers Wilson does this for--she does it for directors, producers, studio heads, writers, Broadway players, etc.

Wilson also spends a great deal of time on issues involving American society in the 20s and 30s--she discusses the FDR administration, the growing Nazi threat, and the Hollywood union situation. These "side roads" are usually interesting and informative, but I as a reader began to suspect that the author would have rather discussed other issues than her main subject.

I think I understand what Wilson was trying to do by injecting so much social history--she was attempting to show the context of the times that Stanwyck lived and worked in. But there is so much extraneous material in the book that Stanwyck herself kind of gets lost in the shuffle.

The problem may have been that Barbara Stanwyck is not an easy person to write about. She was an intensely private individual with almost no "tabloid" moments (other than her relationship with Frank Fay). Stanwyck's idea of leisure was to stay at home and read a book, or attend to her horse farm. There are times where I felt the author was at a loss on how to deal with her subject.

A LIFE OF BARBARA STANWYCK is not a bad book. It will obviously be of interest to film buffs and Stanwyck fans. It probably is the best resource on Stanwyck available till now. But I felt at the end that I still didn't know Barbara Stanwyck very well...and that's something I think Stanwyck herself would have been happy about. (I also think Stanwyck's personal reaction to the book would have been, "Some broad wrote a 1000 page book on me??!! Is she crazy??")

I assume that Victoria Wilson will be writing a sequel covering the rest of Barbara Stanwyck's life. If she does, I hope that the next volume includes more Stanwyck, and less cultural history. A LIFE OF BARBARA STANWYCK is worthy enough for purchase, but some might want to wait until they get a good deal on it (I didn't pay list price--I got it on sale off of ebay), or wait until it is released in paperback.