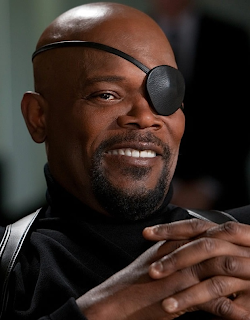 While I was watching TV last night, I saw a credit card commercial featuring Samuel L. Jackson. It suddenly occurred to me that Jackson is the true face of cinematic "geek culture". If you haven't realized it yet, geek culture is the most important facet of today's entertainment industry, whether it be movies, TV shows, books, or even music (are not all those skanky pop princesses merely real-life anime girls?).

Jackson's big breakout role was in Tarantino's PULP FICTION (1994). Most people don't bother to make the connection, but PULP FICTION is a geek movie. Everything that happens in the movie is calculated to a certain extent to draw attention to itself....call it self-referential, or self-indulgent, or whatever, that's a major part of geek culture. Tarantino has had a huge impact on the way motion pictures are now made, a lot bigger impact than is realized. I'll give you an example--remember the end credits scene in THE AVENGERS where the heroes are eating after the climatic battle? That's basically a Tarantino scene. And I'll take it even further....Uma Thurman's character in the KILL BILL movies is to all intents and purposes a superhero (David Carradine even discusses superhero mythology in a KILL BILL VOLUME TWO dialogue scene).

Samuel L. Jackson of course has been associated with just about every Tarantino film since PULP FICTION. But even before that he had made a place for himself in geek history with his supporting role in JURASSIC PARK, where he got to recite one of the greatest lines in modern movie times ("HOLD ON TO YOUR BUTTS!!!"). Jackson went on to appear in a Die Hard movie, and the three Star Wars prequels. He also starred in UNBREAKABLE, a movie some swear is one of the best comic book stories ever, and he had the lead role in SNAKES ON A PLANE, a title that had more popularity and attention on the internet than it did when it actually was shown in theaters (you can't get more geek than that).

Jackson lent his voice talents to the highly successful computer-animated THE INCREDIBLES. The modern animated feature has a huge role in geek culture. And now Jackson stars as Nick Fury in the Marvel movie series. Is there any other actor now that has a resume like that?

There's more to just Jackson than picking the right projects--he has a overwhelming screen presence, and audiences like him a lot. Jackson also doesn't take himself too seriously, and he genuinely seems to enjoy his public image. Whatever project he's in gets a injection of coolness to it. And let's not forget the fact that he is a very talented actor. His role in DJANGO UNCHAINED hasn't been discussed much because it is far too politically incorrect, but he was brilliant in it. Playing a black man who uses the Southern slave society for his own personal advantage, Jackson perfectly exemplified a type of individual that has existed throughout history--the collaborator.

According to a number of internet sources, Samuel L. Jackson is the highest-grossing movie actor of all time. That's an extraordinary record, considering that he is a middle-aged African-American and, despite Hollywood's left wing posturing, the movie industry still favors young white performers. Like it or not, for better or worse, the geeks rule the entertainment world, and that's why Samuel L. Jackson is in his present position.