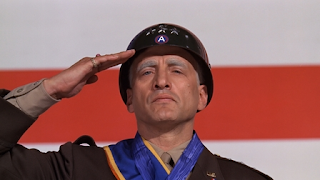 In honor of Veterans Day (or Remembrance Day), I'd just like to thank all the men & women who have served in America's armed forces. I realize that's the very least I can do....if it wasn't for the sacrifices of our Veterans, I wouldn't have the freedom to write this goofy blog.

Being a history buff, I've always been fascinated by World War II. It is without doubt the most important event in modern human history. I've read hundreds of books and magazines on WWII, and I still learn new things about it. It is an incredibly broad and complex subject, and any book (or movie) that attempts to cover it can only hope to scratch the surface.

Nevertheless there are some worthy films that deal with the WWII experience. Of course there's no way a movie can accurately recreate what an ordinary soldier goes through in a combat situation, no matter how many special effects and explosives are used. But an outstanding film can give the viewer a sense and appreciation of the conditions and situations that a member of the military has to deal with. Here then are my five favorite World War II films.


1. PATTON (1970)
Not just a great WWII film--it may be the most accomplished example of a cinematic biography ever. George C. Scott didn't look like George Patton, and he certainly didn't sound like Patton--but for all intents and purposes, he IS Patton. Scott didn't just do an imitation of a historical character (a mistake that a lot of modern actors make), he gave an actual performance. And what a performance it is. Scott explodes off the screen, with an intensity and conviction matched by very few actors. Director Franklin J. Schaffner gives the film an epic scope to match Patton's larger-than-life personality, helped by Jerry Goldsmith's legendary music score. And don't forget Karl Malden as Omar Bradley, the perfect complement to Scott's Patton. I think the reason PATTON works so well is that people on all sides of the political spectrum can watch it--some will look at Patton as a true American hero (like me), others will look at him as a kook. A brilliant film all around.

2. THE GREAT ESCAPE (1963)
John Sturges' All-Star extravaganza based on an actual incident that happened in a POW camp. The screenplay does take some liberties with the real event, but this movie is so well-made and so riveting that I don't think it is that big of a deal. A rousing & exciting action-adventure, THE GREAT ESCAPE is still thrilling even after you've watched it a dozen times. Steve McQueen (as usual) makes the biggest impression--not the easiest thing to do with the acting ensemble that is featured here. This is definitely a "classic" type of war film (no overt gore, no messages or sarcasm) but it still holds up just the same. Special mention must be given to Elmer Bernstein's score.

3. THE BRIDGE ON THE RIVER KWAI (1957)
An epic film from an epic director (David Lean), this movie is so powerful that most people are convinced that everything in it actually happened. It didn't (the screenplay is based on a novel by Pierre Boulle), but KWAI is still far more convincing than most films that are based on wartime fact. British POWs build a bridge for the Japanese....but are they helping the enemy or maintaining their morale and respect? Is the British Colonel determined to finish the bridge (Alec Guinness) mad or honorable?
KWAI doesn't have any easy answers...Lean's films usually don't. The nominal "hero" (William Holden) is unlikable and self-serving, and those who want to destroy the bridge seem just as unstable as those who want to build it. This is one of the few films which deal with the experience of POWs in the Pacific Theater of WWII. (I think that there hasn't been more due to political correctness.) Alec Guinness deservedly won an Oscar for his amazing performance. His quiet observation about a man being closer to the end of his life instead of the beginning is the real highlight of KWAI. Simply a must-see film.

4. THE LONGEST DAY (1962)
Famed producer Darryl F. Zanuck's dream project--a massive retelling of the Allied invasion of Normandy, based on Cornelius Ryan's book. This one always stuck out for me, even when I was a kid, because it was one of the few WWII films where the Germans actually speak German. There's dozens of memorable scenes, but the main one continues to be Red Buttons stuck on the church steeple. An incredible cast....but after awhile, the endless line of famous faces does get to be a bit distracting.

5. DOWNFALL (2005)
A stunning picture which deals with the last days of Adolf Hitler and the Third Reich. There have been other films which have dealt with this subject (and they always seem to have a British actor as Hitler), but DOWNFALL has an edge in that it was made in Germany, with a native cast. Director Oliver Hirschbiegel shows the Fuhrer and his entourage as human beings instead of out-and-out monsters....which makes them all the more monstrous. Bruno Ganz is mesmerizing as Hitler--he's easily the best cinematic Hitler of them all.
Unfortunately DOWNFALL is now famous for all the YouTube parodies which have sprung up using the "Hitler starts raving" sequence. This movie deserves to be known for more than that. A WWII buff's DVD collection is not complete without this film.