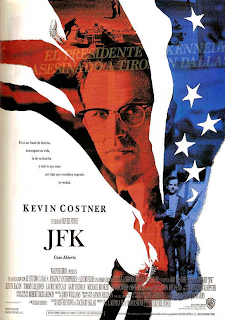 Today, as I'm sure most everyone is aware of, is the 50th anniversary of the assassination of American President John F. Kennedy. I wasn't alive then, so you can't blame me on it. That also means that I'm not a baby boomer. I've noticed that many members of that generation worship the ground that any member of the Kennedy family walked on. I've even heard some say that if JFK and his brother Bobby had not been killed, we would all now be living in some sort of utopia. On the other hand, there are a number of esteemed historians who think that JFK was one of the most overrated Presidents of all time.

It's rather hard for someone like me to get an accurate viewpoint on JFK and his death. I've read several books on JFK's life and about the assassination, but most of them wind up veering into tabloid territory. I honestly can't say for sure what happened at Dealey Plaza on 11/22/63. The older I get, the less inclined I am toward conspiracy theories, simply because the average American can't keep his or her mouth shut for more than five minutes, and the average American government agency can't seem to run a two-car parade, let alone manage a secret military coup.

Let me start this by saying that, no matter what you think about his politics, you cannot deny that Oliver Stone is a master film director. His films are brilliantly made, and unlike a lot of his contemporaries in the movie world, Stone pulls no punches. His stories are confrontational and upsetting, and his characters are never watered down for a mainstream audience. He has a certain viewpoint on modern American history, and he does not apologize for it.

But.....that does not mean Oliver Stone is necessarily always correct.

You can admire an artist for his/her work, but that does not mean you have to follow their opinions or their personal lifestyle. I have a lot of friends who can't believe a guy like me would admire Stone's films, but appreciating their technique does not mean I buy into the director's politics.

JFK is based on New Orleans District Attorney Jim Garrison's investigation into the events surrounding President Kennedy's assassination. My DVD copy of JFK runs a David Lean-like 205 minutes. Yet even at that length the movie is never boring. Stone gives the story a rhythm and pacing that draws the viewer in. Stone also uses every film trick in the book up to that time--slow-motion, time compression, different film grains, black & white, flash-forwards, flashbacks, and dozens of others. The editing (credited to Joe Hutshing & Pietro Scalia) is simply superb (the sound editing is as well). Robert Richardson's cinematography and John Williams' musical score are first-class. You can quibble with Stone's version of events, but the movie itself is magnificently made.

The cast of JFK matches the behind-the-camera talent. Kevin Costner plays the role of Jim Garrison. The real life Garrison was a creepy-looking guy who stood about six feet six. If Stone had cast an actor who really resembled Garrison, the audience would have considered the guy a nut after about five minutes. Stone's casting of the lead role was a clever move. At the time Costner was one of the biggest leading men in Hollywood--he was even being called "the new Jimmy Stewart". Having a handsome, likable, and popular leading man spouting Stone's conspiracy "facts" helps convince the average viewer that there might actually be something to it.

Stone peppered JFK with all sorts of big-name cameos (Jack Lemmon, Donald Sutherland, Kevin Bacon, John Candy, etc.). The reason was simple. Stone hoped that by having so many distinguished actors attached to JFK, the audience would be persuaded that it had to be taken seriously. Ironically, the one performance that stands out the most is that of Gary Oldman as Lee Harvey Oswald (you kind of wind up feeling sorry for him...is that what Stone really intended?).

Stone did a couple other things to put over his view of history. The director constantly mixes up historical footage with that shot for the film (to the point that those not aware will assume that certain scenes are "real"). Stone also went to the actual Dealey Plaza in Dallas and several more real-life locations connected with the historical events. If it looks real....then some will believe it's real.

The famous (or infamous) Zapruder film of the assassination is also shown (when I saw JFK in a theater, I vividly remember that the audience I was sitting with was genuinely shocked by it). Once again, it's another way to give the project "legitimacy".

The film's biggest flaw, in my opinion, is not that Stone doesn't adequately give out enough information to prove a conspiracy...he gives out too much. There are so many theories thrown out, and the movie goes off on so many tangents, that one gets the feeling that just about every other human being that was alive in 1963 had to be involved. Stone links it all to Cuba, Vietnam, and the CIA (at least, I think he does). It's the evil military-industrial complex...the "beast" that Stone refers to in some of his other films. The "beast" was not happy that Kennedy was supposedly intending to pull out of Vietnam.

My problem with that is.....John F. Kennedy was a Cold Warrior. He was also someone that did not like to lose, and someone who would use every trick he had to make sure he won (see the 1960 U. S. Presidential election). I find it hard to believe that Kennedy would have walked away from Vietnam.

If JFK makes a person want to find out more about the Kennedy assassination, to the point of reading a book, that's fine. But one must remember that the film is Oliver Stone's interpretation of real-life events. Too many folks take what they see on the screen as gospel, and that's the last thing anyone should do, especially in this day and age. You can appreciate Oliver Stone's JFK for it's technical virtuosity, but in the end....it's still just a movie.