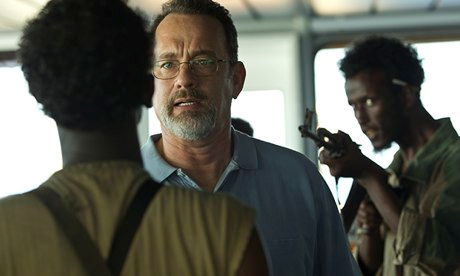 Tom Hanks hasn't had a major hit in a while now. He's at his best when he is playing regular guys involved in an extraordinary situation (APOLLO 13, CAST AWAY, SAVING PRIVATE RYAN). The Oscar-nominated CAPTAIN PHILLIPS gives Hanks a perfect role as the title character.

CAPTAIN PHILLIPS is based on the 2009 incident in which Somali pirates attacked the cargo freighter Maersk Alabama. The event attracted international attention, and Billy Ray's screenplay is based on the book Richard Phillips co-wrote about his experiences (I have to point out that some of the real-life crew members of the ship have claimed that Phillips' account is not accurate).

Tom Hanks as Captain Phillips is just a guy trying to do his job. He's not a father-figure, or a buddy, to his crew--he's just a boss, doing the best that he can. Hanks is not an action hero here, and he doesn't have a snappy one-liner for every situation. His ordinary reactions to major events give this film a realism that most action thrillers could never have.

Director Paul Greengrass (THE BOUNRE ULTIMATUM, UNITED 93) sticks to the main story, and keeps away from the usual Hollywood "extra" stuff (I do wish he'd let his camera people use a tripod every once in a while). There's no fat in CAPTAIN PHILLIPS, and once Hanks and the four Somali pirates get into a small lifeboat, the tension--and the claustrophobia--are ratcheted way up.

The pirates are portrayed not as hardened, cunning professionals, but as basically pathetic near-amateurs. Their disorganization is what makes them dangerous. Barkhad Abdi plays the pirate leader, and he steals the film with a stunning movie acting debut (Abdi has been nominated for a Best Supporting Actor Oscar). Greengrass doesn't go so far as to make the audience feel sorry for the pirates, but he does give a little insight into the tragic lives of these men.

CAPTAIN PHILLIPS has been nominated for a Best Picture Oscar, and it is definitely worth seeing. It's Tom Hanks' best work in years....his breakdown at the end of the film is especially haunting.