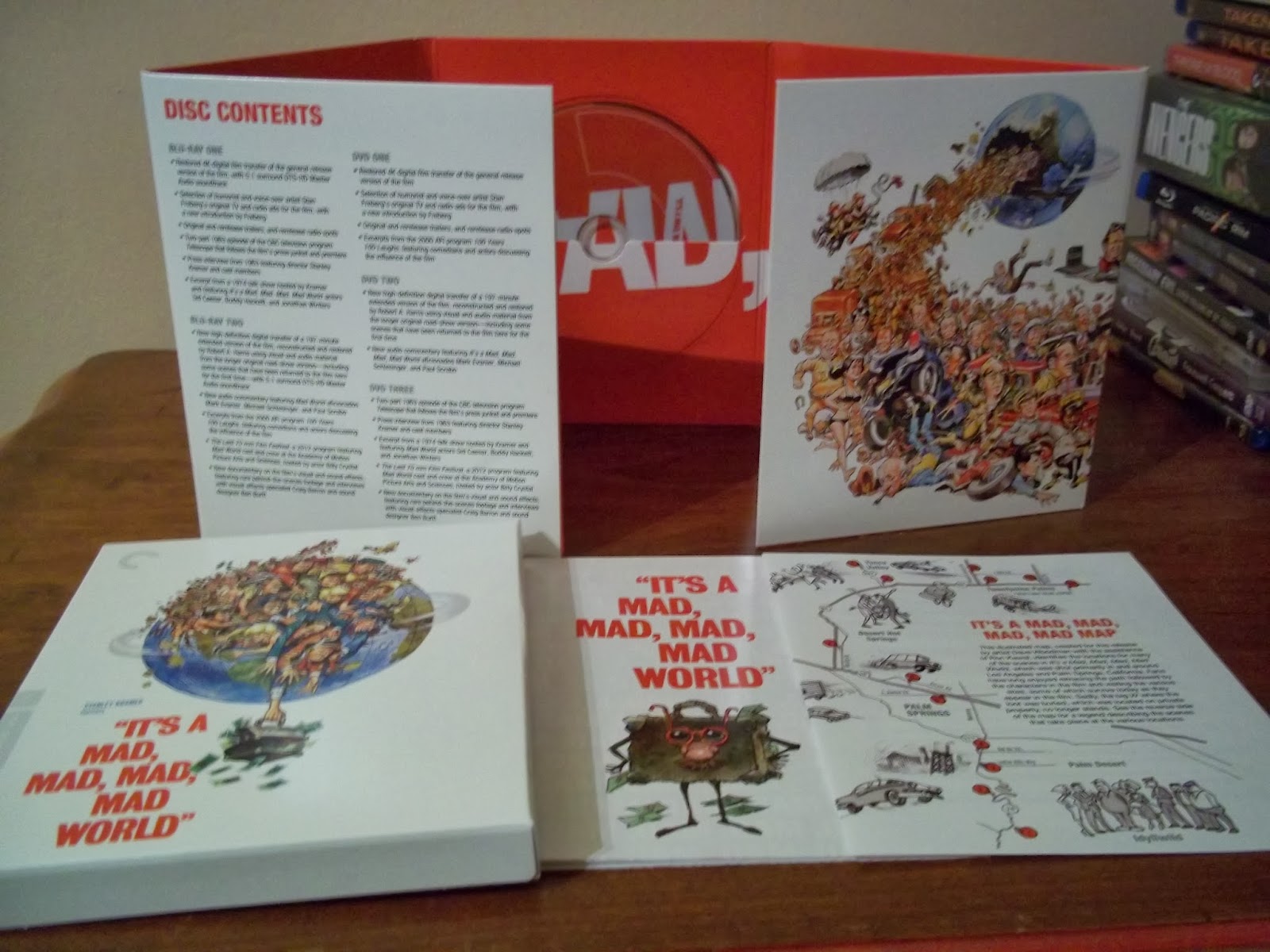 Criterion has just come out with one of their most impressive home video releases ever. Stanley Kramer's IT'S A MAD, MAD, MAD, MAD WORLD gets a 3-DVD, 2-Blu-ray set featuring two different versions of the movie and tons and tons of extras.

The 1963 super-epic all-star comedy was the brainchild of screenwriter William Rose, who wrote the original THE LADYKILLERS. The script found its way to producer-director Stanley Kramer, better known at the time for such serious fare as JUDGMENT AT NUREMBERG and INHERIT THE WIND. Kramer wanted to prove he could handle comedy--so he decided to try and make the greatest film comedy of all time. I don't think IA4MW is the greatest film comedy of all time, but it is certainly one of the most unique movies ever made. One has to appreciate the audacity of Kramer to take what is essentially a B movie comedy plot and stretch it out to BEN-HUR-like proportions.

I'm sure just about everyone over the age of 30 knows about or has seen IA4MW. I remember as a kid it was always a big deal when it was shown on network TV. The cast list is incredible (now one can look at it and say it's almost like a Me TV convention come to life), and any film buff would want a copy of this movie just for that reason.

The Criterion Blu-ray of IA4MW is spectacular--the movie looks like it was made five months ago, instead of fifty years. The 5.1 DTS sound is spectacular as well. With the Blu-ray picture quality it is a lot easier to pick out the numerous stunt men that were used, and it's very plain to see that Spencer Tracy was in bad shape (he looks about 10 to 15 years older than his actual age of 62).

The regular version of IA4MW runs 163 minutes, and the extended version runs 197 minutes. I have to admit that I wasn't really all that impressed with the extended edition. Most of the "new" scenes are just longer versions of the existing ones, and they really don't add anything to the story. The only real important information one gets from the extended edition is the fact that Buster Keaton's character (which is barely seen in the regular version) was supposed to smuggle Spencer Tracy's character into Mexico. The added scenes in the extended edition are not of the same quality as the regular version of the film, and the shifting back and forth between the two might be annoying to some. A few of the additions only exist in soundtrack form, with still photos filling in for the action. The extended version is interesting from a film buff's point of view, but it's really not the best way to watch this movie.

The extras are many, including a booklet with an essay by film critic Lou Lumenick, a map of the shooting locations by artist Dave Woodman, several vintage TV features, and a look at the film's FX by modern-day effects artists Craig Barron and Ben Burtt. The best extra by far is the audio commentary by Mark Evanier, Michael Schlesinger, and Paul Scrabo. They cover every aspect of the production, and tell just about everything you would want to know about the film.

How does IA4MW hold up after all these years? In the past couple weeks, I've watched the two Blu-ray versions, and watched the extended edition again to listen to the audio commentary. I have to admit I'm about Mad Madded out. There are a lot of scenes that are still pretty funny (the Three Stooges cameo is one of the greatest sight gags of all time), and there are a lot of scenes that are just silly for the sake of being silly. What really got my attention was all the fantastic stunt work--this movie has more action scenes than most of the early James Bond films. Of course today all those action scenes would be done in CGI. What makes IA4MW stand out is the sheer spectacle of the whole enterprise--no one can ever make a movie like this again. Just like Stanley Kramer did 50 years ago, Criterion has pulled out all the stops to come out with a home video product that a lot of film geeks will be buying.