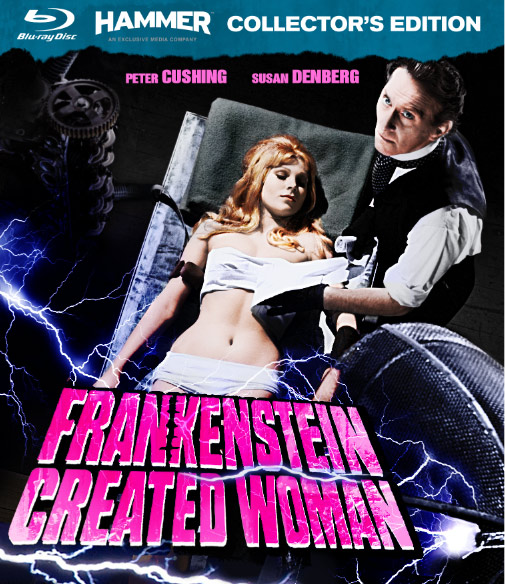 The latest Hammer horror film to be released on Region A Blu-ray is FRANKENSTEIN CREATED WOMAN, courtesy of Millennium Entertainment.

This movie, made in 1966, came after THE EVIL OF FRANKENSTEIN and before FRANKENSTEIN  MUST BE DESTROYED. The Baron (Peter Cushing) is portrayed somewhat in-between as well--he's not exactly a nice guy, but he certainly isn't the murderous fiend he would become in FMBD. In this entry the Baron is attempting to capture a person's "soul"...a pretty wild idea, even for a Hammer film.

Baron Frankenstein's young assistant Hans (Robert Morris) is executed for a murder he didn't commit. Hans' distraught (and deformed) girlfriend Christina (Susan Denberg) drowns herself. The Baron, with help from the befuddled Dr. Hertz (Thorley Walters), traps Hans' "soul", and places it in the revived body of Christina. Frankenstein and Hertz also use surgery to turn Christina into a gorgeous woman.

It appears that the experiment works--but Hans, still "alive" inside Christina, wants revenge on those who set him up, and Christina becomes a vampish avenger.

FRANKENSTEIN CREATED WOMAN is not what I would call one of the best Hammer horror films. Director Terence Fisher does what he can with an intriguing story that has a fair amount of plot holes. Fisher probably saw the film as a tragic romance between Hans and Christina. It's always great to see Peter Cushing as the Baron, especially in his interactions with Thorley Walters and the town villagers.

What makes FRANKENSTEIN CREATED WOMAN memorable are the various stills showing Peter Cushing and Susan Denberg (who appears to be wearing a 19th Century bikini). These publicity photos have really nothing to do with the film--no such scene exists in the story--but whenever FCW is mentioned, those photos are usually what comes to mind. 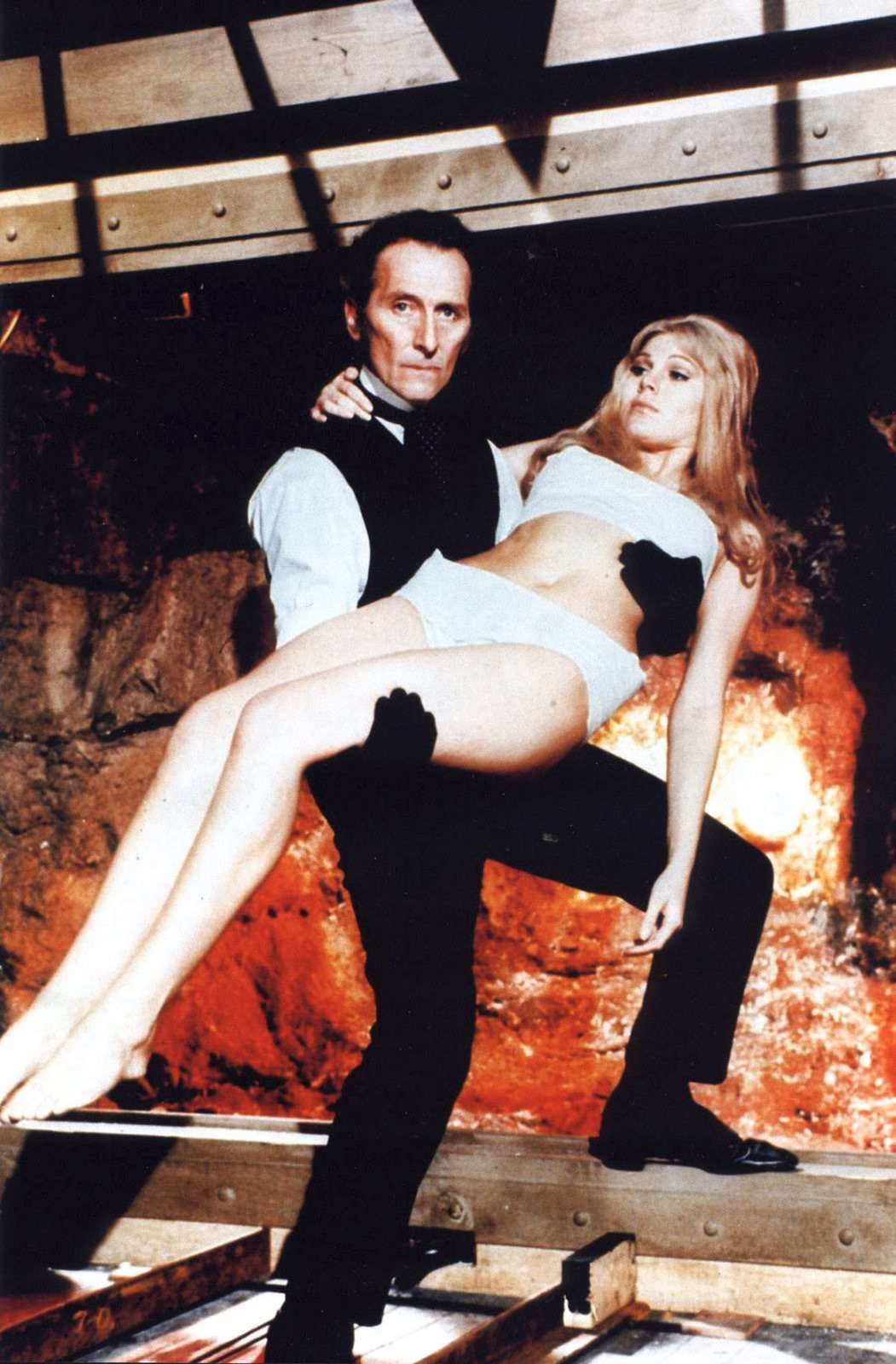 One of the famous publicity shots from FRANKENSTEIN CREATED WOMAN--but nothing like this appears in the actual movie!

Susan Denberg is now one of the most famous and legendary of the Hammer hotties, simply because soon after her role in FCW her career was cut short due to personal issues. She apparently lives in Austria, and no one has been able to get an interview or a public appearance out of her. (If anyone does, it will be the Monster Movie scoop of the century.) Denberg's Garbo-like persona gives FCW an extra element for classic horror film buffs.

Millennium just released FCW on DVD last year (heck, I still have the old Anchor Bay DVD of this title). I'm sure most Hammer fans own this film on DVD, so the question is....is it worth buying the Blu-ray? I would say yes, because of the extras. The audio commentary features Hammer expert Jonathan Rigby and FCW actors Derek Fowlds and Robert Morris. The commentary is entertaining and informative, with both Fowlds and Morris giving some insight into the mysterious Susan Denberg. Usually an audio commentary on a Hammer film involves the stars or one of the Hammer hotties, so this one is unique in that it has two supporting male actors. This Blu-ray also has a brand new documentary directed by Marcus Hearn called HAMMER GLAMOUR. This features a number of Hammer ladies, including Caroline Munro, Vera Day, Madeline Smith, Jenny Hanley, Martine Beswicke. and Valerie Leon. This is a great featurette, and I wish it had been longer (it is only 44 minutes). Also included on this disc are two "World of Hammer" episodes: "The Curse of Frankenstein" and "Hammer Stars: Peter Cushing". There is also a seven minute long stills gallery, with numerous photos that I had not seen. And there's one more bonus--five movie cards are packaged inside the Blu-ray case (see photo below).

As for the visual quality of this disc....FCW has always looked rather dull and flat (it certainly does not have the pictorial elegance of, say, THE MUMMY or BRIDES OF DRACULA). This Blu-ray makes the picture look sharper, but I would not say it's that major of an improvement over the other DVD releases of this title. It is the extras that make this Blu-ray a nice purchase for Hammer fans and monster movie buffs. 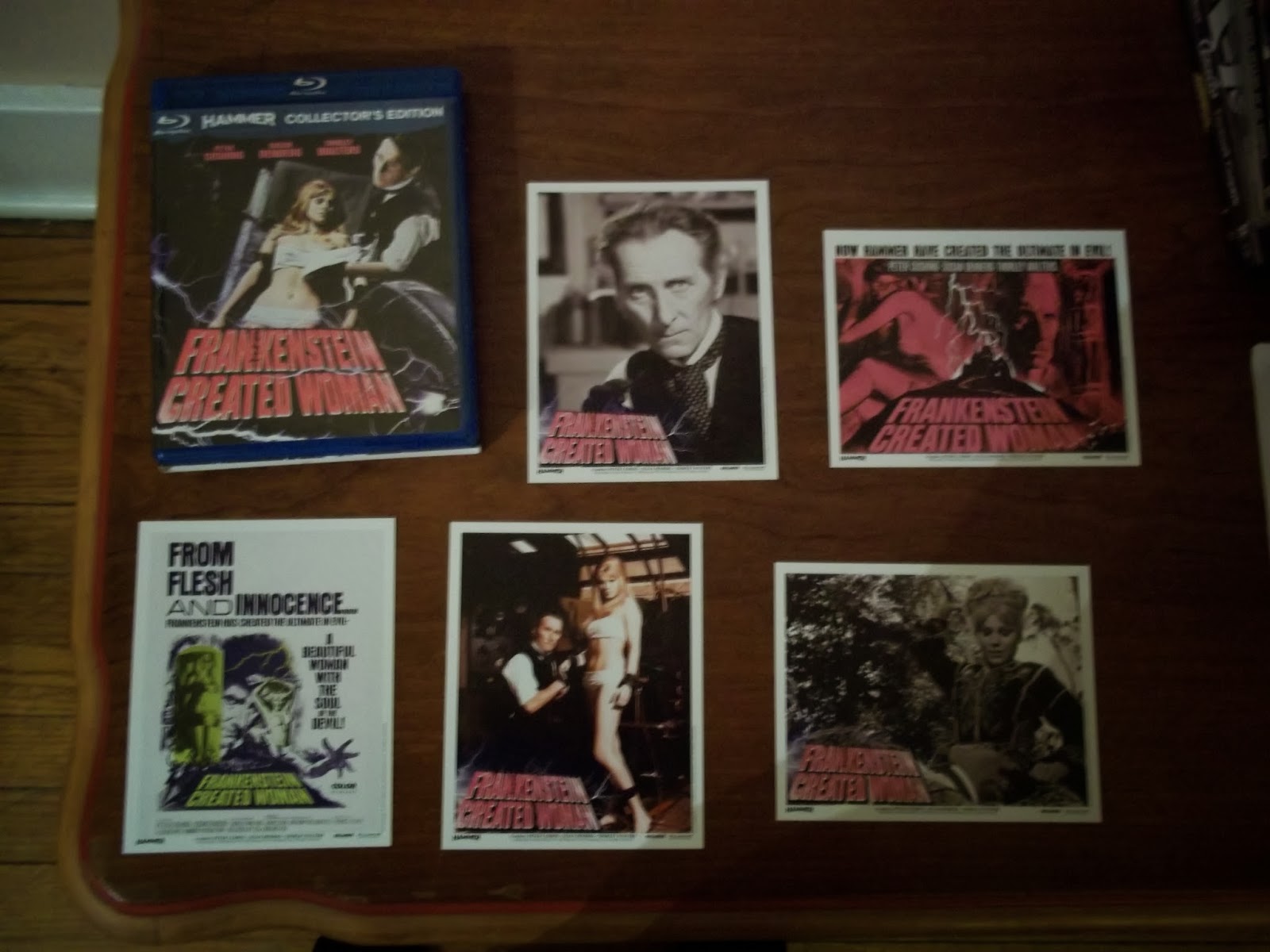