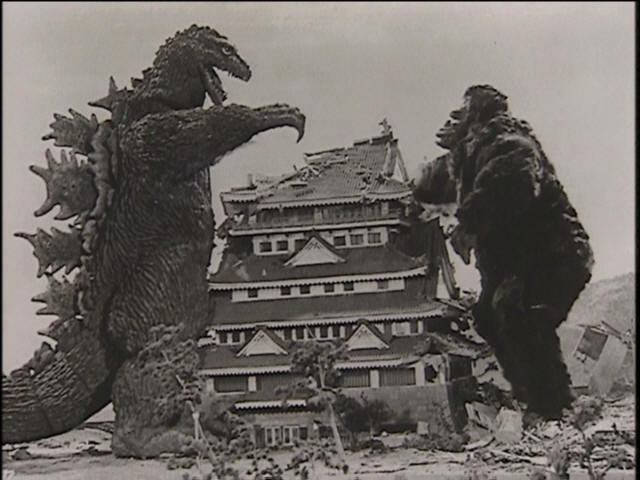 You can, however, go on Ebay and get a copy of the Japanese version, if you so desire. Seeing KKVG again inspired me to finally do so. You have to watch out when you order a DVD on Ebay--you have to watch out when you order anything on Ebay--but the copy I got had good sound and picture quality, English subtitles, and it actually worked (which is always a good thing).

The Japanese version runs 97 minutes long, as opposed to the 90 running time of the US version. The original version does not have the silly UN TV reporters, and has a bit more scenes featuring the human characters (which will disappoint some fans). We get more "comedy" from the goofy Mr. Tako--but we also get to see more of Japanese hotties Mie Hama and Akiko Wakabayshi (who would both later appear in the James Bond film YOU ONLY LIVE TWICE).

While some of the Japanese dialogue is very different from the dubbed dialogue of the American version, there are a lot of scenes where the lines are exactly the same. The biggest difference between the two versions of KKVG is that the Japanese one has more depth to it--in the character development, and especially in how the authorities deal with the monsters. In the American edition it appears as if the Japanese officials have thrown together a monster-fighting plan in about five minutes--they talk about using electrical towers to stop Godzilla, and boom, there they are. In the Japanese edition, there are more scenes of those great miniature machines going around and building everything used to stop Godzilla. The sequence involving the lifting of King Kong with wire and balloons is lengthier as well.

What the American version is really missing is the original musical score by Akira Ifukube. Ifukube was to Toho Studios as James Bernard was to Hammer Films. His score (which I have on CD--yeah, it's me) gives the Japanese version the only dramatic weight it really has. The American version has a score made up of various musical cues from 1950s Universal Westerns and horror films--if you listen close you can hear several cues from THE CREATURE FROM THE BLACK LAGOON.

For a long time there have been rumors that the Japanese version of KING KONG VS. GODZILLA had a different ending than the American version. When I first started getting into monster movies as a kid, I read about this "fact" in several books. The real fact is that the endings are the same. After Kong and Godzilla destroy the Osaka castle, they both fall into the sea, where Godzilla disappears, and Kong is seen swimming away, presumably back to his home on Faro Island. In the American edition, you do hear Kong's roar at the end, apparently signaling that Kong won the battle. In the Japanese edition, you hear the roars of both monsters--maybe that's where the different endings rumor started.

No matter what version of KING KONG VS. GODZILLA is shown, I have to admit that the film itself is a bit of a letdown. The whole subplot about the "magic berries" of Faro Island, and the goofy Mr. Tako's company wanting to sell the berries and use King Kong in an ad campaign, is silly. Having two male leads, on two separate ships, takes up too much of the story. Poor Mie Hama gets chased by both King Kong AND Godzilla (a monster movie heroine record). And the King Kong suit is...lousy. This is one time where Eiji Tsuburaya's FX team didn't get the job done. The Kong suit looks as if it was made out of an old rug that you would find in your Grandma's attic. The special articulated Kong head used for close-ups looks even worse. (King Kong wouldn't look any better in Toho's later KING KONG ESCAPES.)

The battles between Kong and Godzilla are spectacular, but they are also somewhat dopey. The monster-fighting scenes would improve over the course of the future Godzilla films. You expect a lot out of a film like KING KONG VS. GODZILLA, but it just doesn't live up to its premise. The next film in the series, GODZILLA VS. MOTHRA, is way better. If you ever get a chance to see the Japanese version of KING KONG VS. GODZILLA, do it. It's a bit of an improvement over the American version....but not much.