The 1931 Spanish Version Of DRACULA 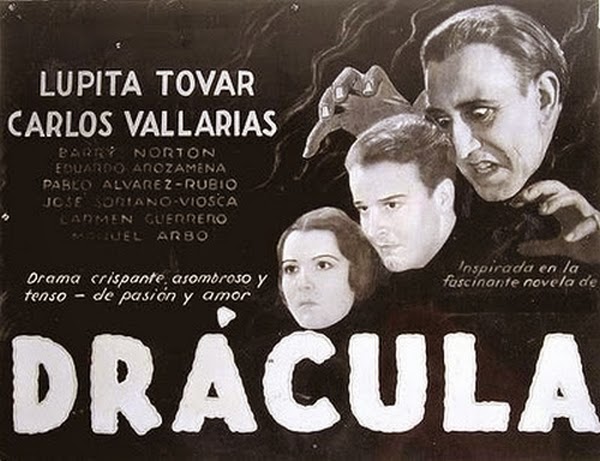 While reading Gary D. Rhodes' book TOD BROWNING'S DRACULA, I took the opportunity to revisit both versions of the film that Universal produced in 1931. One of the main themes of Rhodes' book is that the Spanish version of DRACULA is not the "lost" classic that many critics have made it out to be.

The reason that a special Spanish version of DRACULA was produced at all is that in the early 1930s sound dubbing had not been perfected, and Universal did not want to lose any box-office from foreign audiences. With a silent film, all a studio had to do was change the title cards to make a picture understandable for a certain overseas market. With a sound film, things were a bit trickier. The result was that, for a very short time, a few films of the early 1930s had "alternate" versions--some of them with totally different actors, and totally different technicians behind the camera.

I own both 1931 versions of DRACULA on home video, and I've seen them multiple times. I can definitely state that, in my opinion, the Spanish version is NOT superior to the Tod Browning/Bela Lugosi DRACULA.

One of the biggest criticisms of the Browning/Lugosi DRACULA is that it is slow and creaky--even though it is only 75 minutes long. The Spanish DRACULA, directed by George Melford, clocks in at 103 minutes, and it basically has the same exact story. If you think the Browning/Lugosi film moves like a snail, try watching the Spanish version sometime. More isn't necessarily better, especially here. The script for DRACULA was talky enough as it is, and the Spanish version has more talk. I am not fluent in Spanish, and maybe if I was, I would appreciate the dialogue in the Spanish version better--but I doubt even that would have improved the film for me.

The added talk might have been better served if the American DRACULA actors had been able to deliver it. The Spanish DRACULA cast can't hold a candle (pun intended) to the American performers. Let's face it, how could any actor outshine Bela Lugosi in his signature role? Carlos Villarias (billed as Villar in the film) portrays Count Dracula. He's obviously no Lugosi (who could be?), but to be fair how many Spanish-speaking actors at that time had ever had experience in playing a vampire before? Lugosi's critics have called his DRACULA performance out for being hammy--but Lugosi is far more subtle in the role than people give him credit for. Villarias is more like a typical bad guy than Lugosi's strange unearthly creature. Even though I can't speak Spanish I could tell that Villarias used a far more "normal" speech pattern than Lugosi did (all of Bela's classic lines fall flat in this edition). Villarias also spends a lot of time grimacing....so much so that he looks as if he is physically sick.

Pablo Alvarez Rubio plays the mad Renfield. The American Renfield was of course played by Dwight Frye, and his performance has become legendary, like that of Lugosi. Once again I have to point out that, like Bela, the supposed-hammy Frye's Renfield is more assured than people realize. Watching Rubio makes one understand just how magnificent Frye was in the role of a madman. Rubio spends most of his time throwing back his head and laughing crazily--a somewhat ordinary way of showing a extraordinary character. Rubio has far more screen time in the Spanish DRACULA then just about anyone else, so his act gets tiresome as the movie goes along.

Eduardo Arozamena plays Van Helsing, and he just can't compete with Edward Van Sloan's take on the character--especially Van Sloan's unique line readings. Arozamena does seem to be wearing the exact same style of glasses as Van Sloan does in the American DRACULA.

If there is one performer in the Spanish version that stands out, it is Lupita Tovar in the role played by Helen Chandler in the American version. Tovar is far more emotional and passionate (Chandler has always seemed to me to be a bit bloodless even before she gets bitten by Lugosi). It would have been interesting to see Tovar paired up with Bela's Dracula.

Those who champion the Spanish DRACULA focus on that film's visual quality more than the cast. Many say that George Melford did a better job of direction than Tod Browning, and some go even as far to say that George Robinson, who was the cinematographer of the Spanish version, did a better job than the legendary Karl Freund. The Spanish DRACULA might have a few standout camera moves, but it isn't an exceptionally photographed film. The Spanish version used the same sets as the American (the Spanish production team filmed at night while the American team was off), and it also used a number of shots from the American version--which sets up some blatant continuity errors. The Spanish version had a shorter shooting schedule than the American, and it shows in some rather clumsily staged scenes, such as one where Villarias as Dracula is delivering dialogue while he is hidden by a large candelabra. The confrontations between Dracula and Van Helsing are superior in the Browning/Lugosi version. There's some fine touches in the Spanish version, such as during Dracula's journey to England by boat, where Renfield is framed looking out a porthole laughing maniacally while the Count begins his attack on the ship's crew. All in all, however, I don't feel that there is anything in the Spanish version that is appreciably better than the American.

I think the real reason so many critics and film historians have looked favorably on the Spanish DRACULA is that it was not as familiar as the American DRACULA. Most monster movie fans have seen the Browning/Lugosi DRACULA dozens of times, so they might easily consider the Spanish DRACULA as fresh and different on a first viewing of it. I believe both 1931 versions of DRACULA suffer from a script that tries to be a mixture of Bram Stoker's novel and the Broadway play. In my opinion the story of Dracula, at least the story of Stoker's novel, has never properly been adapted to the screen. (The Francis Ford Coppola BRAM STOKER'S DRACULA was assuredly not Bram Stoker's Dracula.) The Spanish version should be best looked at as an example of what certain actors can bring--or not bring--to a certain role.

If you are a classic horror film fan and have not seen the Spanish 1931 DRACULA, you should check it out just for historical reasons alone. How many times are you going to be able to see an alternate version of a famous film, made at the same time, with the same sets, but with a different cast?