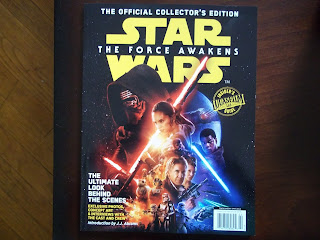 It's been a week since the opening of STAR WARS: THE FORCE AWAKENS, so I believe it's safe enough for me to discuss the film in greater detail. (WARNING!! If you have not seen the film yet, DO NOT read this post.)

As I said in my first impressions post on the film, I liked it. I thought it was a very good film....but not a great one. The main reason I do not think it is a great film is that it is essentially a remake of the original 1977 STAR WARS.

Let me run this synopsis by you to prove my theory.

The movie starts out with a group of soldiers from a militaristic dictatorial government searching for secret information in the possession of a small band of resistance fighters. One of the resistance fighters hides the information inside a droid, and the droid is stranded on a desert planet. The droid is stumbled upon by the main protagonist of the story. The main protagonist is living an underwhelming existence on this desert planet and is unaware of his/her personal background.

Once again I have to go on about how I don't like remakes and reboots. When you are dealing with the science-fiction/fantasy genre, you have the ability to do anything....you shouldn't have to remake other stories. I have the feeling that the Disney executives wanted to make a movie that pleased the ordinary Star Wars fan, so they set out to make it as familiar with the Original Trilogy as possible.

It's not just the story of STAR WARS: THE FORCE AWAKENS that's familiar--the "new" supporting characters are as well. General Hux is a version of Grand Moff Tarkin, Maz Kanata is a version of Yoda, Supreme Chancellor Snoke is very reminiscent of the Emperor, and Captain Phasma is a watered-down version of Boba Fett. And then there's Kylo Ren, who basically takes over the Darth Vader role. The Rebels are now the Resistance, the Empire is now the First Order, and both groups are still using X-Wings and TIE fighters. 30 years may have passed since the end of the Original Trilogy, but it appears as if nothing has changed. The bad guys are still stuck on the Death Star route--doesn't anybody learn anything?

Once again, I must reiterate that I don't think THE FORCE AWAKENS is bad...I just wish it had been more original. Hopefully the next Star Wars films will expand upon what happened in the last 30 years of this galaxy. THE FORCE AWAKENS leaves more questions than answers--and I think that was what Disney wanted. Remember, there's a whole Star Wars Multi-platform Universe now--so all the questions we have about THE FORCE AWAKENS will more than likely be explained with a whole line of books, comics, TV shows, and other movies. I know I sound cynical, but I'm convinced the vagueness of the backstory of THE FORCE AWAKENS has to do with more money-making opportunities than plot convenience.

The biggest, and most shocking, moment in THE FORCE AWAKENS is without doubt the killing of Han Solo by Kyle Ren. When I saw it on opening night, I couldn't believe it was allowed to happen. I realize that Han's death is the "Vader kills Obi-Wan" moment....but that doesn't mean I have to like it. I'll fully admit that one reason why I don't totally love THE FORCE AWAKENS is because Han Solo gets killed in it. It bugs me that we won't get a reunion with Han and Luke, or more scenes with Han and Leia. But I also think killing Han was a bad idea for the future Star Wars films. Han Solo was a charismatic, humorous, and likable character....in other words, a character the Star Wars prequel films were sorely lacking. Look at it this way.....what would THE FORCE AWAKENS had been if Han wasn't in the film at all?

STAR WARS: THE FORCE AWAKENS is a huge success, financially and critically. There are some comparing it to the original STAR WARS and THE EMPIRE STRIKES BACK. It is nowhere near that level, no matter how much the general public has embraced it. All over the internet and social media people are going crazy over it--it's as if the millions of Star Wars fans throughout the world are finally allowed to feel good about their favorite franchise again. I'm sincerely not trying to poop on everyone's parade--I liked the movie, I had fun seeing it on the very first night, and I'll see it multiple times. But it could have been better.
Posted by Dan Day, Jr. at 2:12 PM