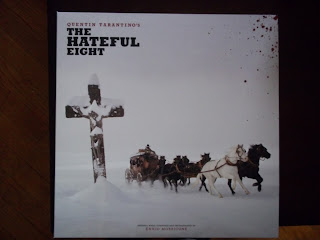 One of the trendiest things going on today is the buying, selling, and collecting of vinyl records. If you are a major film buff who enjoys listening to movie soundtracks, chances are you have had a sizable record collection for years. The main reason for that is many original film soundtracks are only available on vinyl. There are music scores for several renowned movie titles that have yet to see the light of day on CD.

If you have never bought an original film soundtrack on vinyl before, there is a new release that will give you the perfect reason to go back to the needle. Ennio Morricone, the man many consider to be the greatest film composer of all time, has written a brand new original score for Quentin Tarantino's highly anticipated Western THE HATEFUL EIGHT. This is the first time in 40 years that Morricone has created a new score for a Western film. Morricone of course redefined the Western, and film music in general, with his legendary work for director Sergio Leone in the 1960s.

I've been a huge Morricone fan for years, and I own a number of his soundtracks. When it was announced that Morricone would do the music for THE HATEFUL EIGHT, I hoped that it would be released on vinyl--what could be better than getting a new Morricone Western film score on a record? Third Man Records has released THE HATEFUL EIGHT soundtrack on a double-album collection which even includes extras.

I'm not very articulate when it comes to describing or defining music--the best I can come up with is "It sounds good to me". What I can tell you about this soundtrack is that it is based on a driving, haunting main theme that seems more akin to a mystery-thriller story than a tale about the 19th Century American frontier. When I listened to this score, I got the feeling that someone was being pursued or stalked. I must point out that it's always a dicey proposition trying to describe soundtrack music when one has not even seen the visuals that are supposed to accompany it. When I finally do see THE HATEFUL EIGHT my opinion on the soundtrack may wind up being totally different. But whether the sounds remind you of a Italian giallo rather than an American Western, the end result is unmistakably Morricone. Just don't expect a rehash of THE GOOD, THE BAD, AND THE UGLY....this score is far removed from the Morricone-Leone collaborations.

Morricone's work on THE HATEFUL EIGHT is the very first original score created for a Quentin Tarantino film. The score is not 100% Morricone, however--as usual for a Tarantino picture, there's a few obscure songs from such artists as The White Stripes and Roy Orbinson. Both albums also feature dialogue snippets from the film, which means the listener will be able to hear the quirky, foul-mouthed exchanges I refer to as "Tarantino-speak".

This Third Man Records release also comes with two different fold-out THE HATEFUL EIGHT posters, and a booklet containing images from the film. Third Man Records puts out excellent material, and this package has the feel and look of a special edition release.

No matter what sort of critical and box office reception THE HATEFUL EIGHT gets, the fact that it carries a brand new Ennio Morricone score gives it a special advantage. Quentin Tarantino has used Morricone film music for years--albeit Morricone music written for other productions. The only thing more amazing than Tarantino and Morricone "officially" working together may be that the now-87 year old composer is still creating exemplary product.