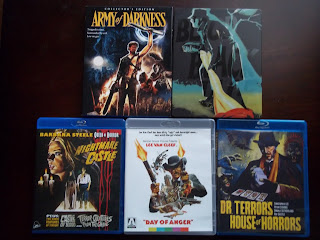 Once again it is time for me to reveal my personal top five DVD/Blu-rays of 2015. I've made a list like this every year since 2012.

As usual, I need to remind everyone that my picks come from my own personal home video collection--in other words, the entries are limited to whatever I bought in the past calendar year.

Kino has always managed to obtain a huge share of my hard-earned income, and this year it was especially so. The company released several obscure genre films in 2015, along with some interesting items from their "Studio Classics" line. Ironically there are no Kino discs on this list--but it wasn't for lack of quantity, I can assure you.

1. ARMY OF DARKNESS (Blu-ray) from Shout Factory
One of my favorite films, and a great goofy piece of entertainment. Shout Factory outdid themselves with this release--four versions of the film, and a boatload of extras, spread out over three discs. I wrote a post on this one in November.

2. BLOOD AND BLACK LACE (Blu-ray) from Arrow Video
Mario Bava's seminal giallo gets a superb presentation from England's Arrow Video. 2015 marked Arrow's debut in the American release market, and they didn't disappoint--the company holds down two slots on this list. The transfer on this Blu-ray is stunning, and the extras are momentous. Can't wait to see what Arrow has in store for the future.

3. NIGHTMARE CASTLE (Blu-ray) from Severin
This is really the equivalent of a Barbara Steele box set. Along with the featured title, you get two other Steele shockers, and extras for all three films. Overall, an impressive tribute to the Queen of Spaghetti Horror. I wrote a blog post on this Blu-ray in September.

4. DAY OF ANGER (DVD/Blu-ray) from Arrow Video
This year was a huge one for Lee Van Cleef fans--no less than four of his films received major home video releases. DAY OF ANGER is the best of them all, and Arrow treats it the way Criterion would treat a European art film. I wrote a post on this in April.

5. DR. TERROR'S HOUSE OF HORRORS (Blu-ray) from Olive Films
One of the most requested titles from movie buffs to be released on home video finally gets proper treatment on Blu-ray. I know that there is a Region B release of this title with a ton of extras, but American fans should be more than satisfied with this Region A disc. I wrote a post on this one in October.
Posted by Dan Day, Jr. at 1:58 PM